A team of Chinese physicists did what other researchers were skeptical about doing. For the first time ever, they conducted quantum communication through water. This success could mean the world is one step closer to viable quantum transport and even teleportation.

Thanks to a team of Chinese researchers, the world is now one giant leap closer to making quantum teleportation a reality. The Chinese physicists successfully sent information between entangled particles through water. This marks the first time ever that such quantum communication has happened.

Xian-Min Jin and his team from the Shanghai Jiao Tong University are responsible for the experiment. They used salt water from the Yellow Sea, putting it in a container 3.3 meters (almost 11 feet) long and tested quantum entanglement. In short, quantum entanglement is when two particles become so linked that whenever something happens to one particle, the other particle is immediately affected. With quantum entanglement, distance does not matter. The team created the pair of entangled photons by shooting a beam of light through a crystal. The polarization of one photon gave its pair the opposite polarization. Researchers placed the photons on opposite sides of the tank. Using that distance, the team found that they could communicate information via these linked photons with 98 percent effectiveness, despite the water.

"Our results confirm the feasibility of a seawater quantum channel, representing the first step towards underwater quantum communication," the researchers wrote in the journal The Optical Society.

Because of similarly proven strong connections, physicists have theorized that quantum communication (and eventually possible teleportation) could open lines of communication that no one else could receive except for the recipient. It would be the tightest form of encrypted messaging.

The success of Jin and his colleagues doesn't mean this is a viable opportunity yet. The experiment, as noted by the research team themselves, is only proof-of-concept rather than full scale. However, Jin confidently noted that the team wishes to expand the communication lines to almost 900 meters (roughly 2,950 feet) through open water.

What makes this event truly strange is that few physicists expected much success underwater. Thus, few teams even attempted to do underwater communication research.

Thomas Jennewein serves at the University of Waterloo in Canada. He told New Scientist, "“People have talked about the idea of underwater quantum communication before, but I’m not aware of anyone who has done an experiment like this."

For Jennewein, using the success of this experiment as obvious: submarines.

"An obvious application would be a submarine which wants to remain submerged but communicate in a secure fashion," he said.

The researchers also noted in their findings that quantum communication could overcome many faults currently experienced through conventional underwater communication.

"Underwater communication is vital for undersea exploitation and modern communication," they wrote. "Conventional ways which employ acoustical technique for underwater communication have their drawbacks, including high path loss, narrow bandwidth, high bit error rate, among which unconditional security is more demanding due to commercial and secure interest. The question arises of whether quantum communication can be achieved by employing seawater as a reliable channel."

This is not the first quantum success for the Chinese. Over the summer, researchers with the Jiquan Satellite Launch Centre teleported photons into orbit for the first time. The satellite named Micius works as an incredibly sensitive photon receiver that can detect quantum states of photons sent up from the ground. The first satellite-to-ground network not only set the record for longest distance of quantum communication. It also served as the quantum network that teleported the first object (a photon) from ground into orbit.

"Long-distance teleportation has been recognized as a fundamental element in protocols such as large-scale quantum networks and distributed quantum computation," the Micius team said.

While the world isn't quite ready to say "Beam me up, Scotty," quantum physics is inching toward successes each day. As they've managed to have several of the most recent major breakthroughs under their belt, Chinese researchers could be the ones to watch in pushing the limits to quantum mechanics.

Via: The Optical Society of America, 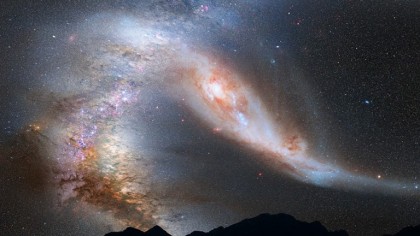