Researchers Teach Robots How to Grasp Objects Like Humans

Robots are learning to grasp objects as part of a huge research project, FAMULA, at Bielefeld University. The team of researchers operates as part of the Cluster of Excellence Cognitive Interaction Technology (CITEC).

The project is working on a robot that has two hands that are, in design, very similar to human hands in both shape and function. The robot will learn how to handle everyday items such as fruit, dishes and other common household objects. The robot also will learn how to distinguish the object based on its size, shape and color, as well as other factors needed to assist the robot in gripping. 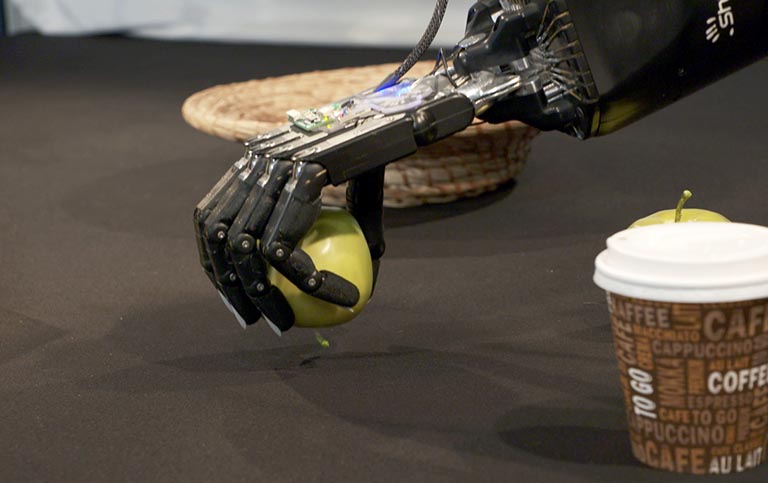 The research collected from this project will contribute to the development of robots that could work independently inside households. "Our system learns by trying out and exploring on its own - just as babies approach new objects," says neuroinformatics Professor Dr. Helge Ritter, who leads the FAMULA project.

The team needed to really understand how humans grasp and understand how to differentiate before this knowledge could be taught to robots. They did this by forming an interdisciplinary team that utilizes research from a wide range of disciplines. In one study led by sports scientist and cognitive psychologist Thomas Schack, the test subjects were asked to compare the similarity of a range of objects.  "It was surprising that weight hardly plays a role. We humans rely mostly on shape and size when we differentiate objects," says Thomas Schack

In another test, the researchers covered the eyes of test subjects' as they handled cubes that differed in weight, shape, and size as infrared cameras recorded the movements of their hands. "Through this, we find out how people touch an object, and which strategies they prefer to use to identify its characteristics," explains Dirk Koester, who is a member of Schack's research group. "Of course, we also find out which mistakes people make when blindly handling objects."

The team has taken these studies and is now teaching a robot in the lab how to handle objects using both gestures and simple voice commands. "In order to understand which objects they should work with, the robot hands have to be able to interpret not only spoken language, but also gestures," robotics privatdozent Sven Wachsmuth, of CITEC's Central Labs explains.

Dr. Helge Ritter, who heads the FAMULA project goes on to say, “We want to literally understand how we learn to 'grasp' our environment with our hands. The robot makes it possible for us to test our findings in reality and to rigorously expose the gaps in our understanding. In doing so, we are contributing to the future use of complex, multi-fingered robot hands, which today are still too costly or complex to be used, for instance, in industry."

ITEC has invested approximately one million Euro in FAMULA, guaranteeing the future of the project.

SEE ALSO: These Sensors Give Robots A Human-Like Sense of Touch