Researchers Use Magnetic Fields to Bring Soft Robots to Life

Robots are getting a new mechanical overhaul with the use of magnetic fields to control their movements. Scientists from the North Carolina State University are developing ways to create soft robots with more fluid robotic movements.

Rigid body movements is often an undesirable characteristic when it comes to the field of robotics. Soft robots are a breed of robots that are made with non-rigid materials such as silicone, rubber, plastic fabric etc. Being able to undergo large deformations make soft robots ideal pieces of instruments to carry out more complicated tasks such as in the field of biological engineering. One interesting use of soft robots is through making 'heart assist devices' by researchers from Harvard University.

"The chains allow us to manipulate the polymer remotely as a soft robot by controlling a magnetic field that affects the chains of magnetic particles", says Joe Tracy, an associate professor of Material Science and Engineering from the North Carolina University. 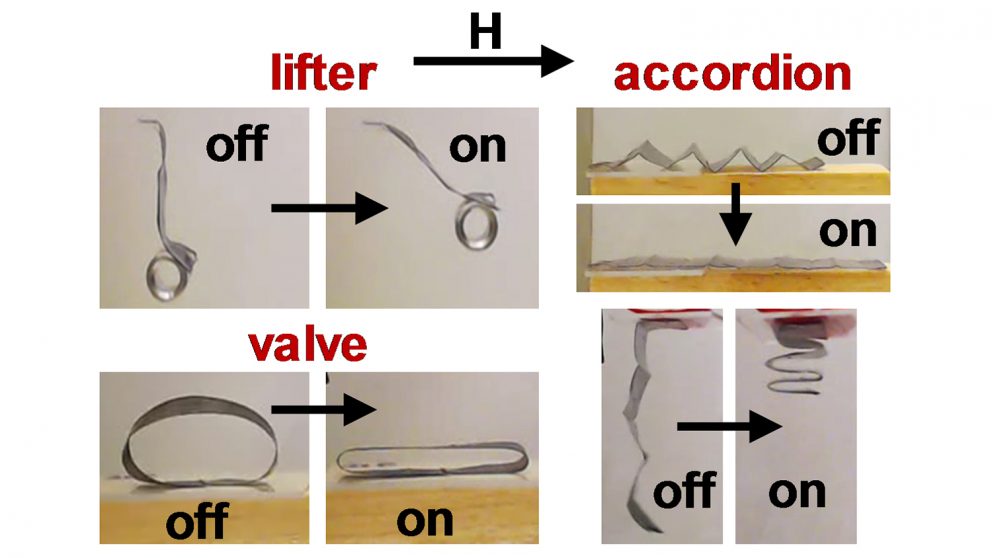 The applied magnetic field's direction can be used to spark the chains of iron microparticles to align themselves and the surrounding polymer in the same direction.

By using this technique, the team has managed to create three kinds of soft robots. "One device is a cantilever that can lift up to 50 times its own weight. The second device is an accordion-like structure that expands and contracts, mimicking the behavior of muscle. The third device is a tube that is designed to function as a peristaltic pump – a compressed section travels down the length of the tube, much like someone squeezing out the last bit of toothpaste by running their finger along the tube", stated the team.

They were particularly interested in developing the metric way of assessing the performance of magnetic lifters such as the cantilever. “We do this by measuring the amount of weight being lifted and taking into account both the mass of particles in the lifter and the strength of the magnetic field being applied,” says Ben Evans, associate professor at Elon University and co-author of the published paper. This is a good applicational field for this technology as it will provide other researchers experimental ways of assessing performances of different devices.

For now, the team is in possession of a magnet-fueled strip and the associate professor, Joe Tracy, is open for anyone to pitch in ideas for potential use of these soft robots. "We need more ideas of what we can do with it", said Tracy.

I think soft robots are the future of research, with further advancements the applicational uses may be limitless. More scientific and engineering breakthroughs can be achieved because of this technology.

SEE ALSO: Soft Robotics and the Materials That Could Revolutionize the Field