The findings were recently published in the journal Proceedings of the National Academy of Science. It was funded by the Engineering and Physical Sciences Research Council (EPSRC) in the United Kingdom.

The team dubbed their creation acoustic 'tweezers' for its ability to pinpoint and capture objects in desired positions with accuracy.

The researchers hope the findings can be used similarly to optical tweezers -- the object that won this year's Nobel Prize in Physics. Optical tweezers use lasers to capture and transport microparticles. Rather than lasers, acoustic tweezers would be safer in penetrating tissue and offer a noninvasive option.

According to the researchers, acoustic tweezers also offer higher precision and efficiency to optical systems.

"Optical tweezers are a fantastic technology, but they always come dangerously close to killing the cells they manipulate. By contrast, the acoustic version enables us to generate forces with the same magnitude but with much less energy. There are many applications that call for cell manipulation, and acoustic systems are perfect for that," pointed out Professor Bruce Drinkwater, lecturer in the Department of Mechanical Engineering at the University of Bristol.

The researchers used two millimeter-sized spheres on the ends of a thin thread. They then used the acoustic tweezer system to "sew" a piece of fabric. Their algorithm and system can control up to 25 particles in the air accurately.

"The flexibility of the ultrasound waves enables us to operate on micrometric scales to move cells within printed 3D structures or living tissue," explained researcher Asier Marzo. "But we can also work on a larger scale, for example, to levitate tangible pixels that form various objects in the air." 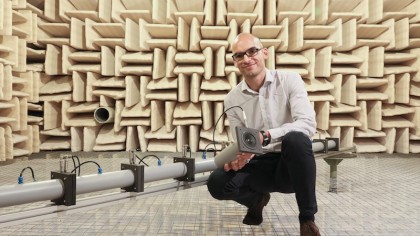 The levitating particles can be seen by multiple people and at multiple angles. It could also be manipulated and touched by researchers directly if needed.

"We are used to two-dimensional pixels enclosed in our monitors, but we would like to see a technology in which objects are made up of tangible pixels that float in mid-air," added Marzo, a researcher at the Department of Statistics, Computing and Mathematics of the Public University of Navarre.

With the exception of the vacuum of space, sound exists everywhere. Most people don’t think of sound as a physical thing. However, sound exerts force on an object, and sometimes there’s enough force to move an object. Acoustic levitation uses the properties of sound on solid objects and leverages them to cause objects to float.

Acoustic levitation has fascinated scientists for hundreds of years. However, in recent years, physicists have tapped into the power of sound waves to disperse particles or larger objects for other fields. In 2012, researchers from Argonne National Laboratory discovered how to use sound waves to individually drop different pharmaceuticals.

As for this international team, they hope to use the acoustic tweezers to manipulate particles in the water next. From there, they'll move on to biological tissue.

Via: ELHUYAR FUNDAZIOA via EurekAlert