Researchers used a revolutionary synthetic molecule along with genetic editing to cure a genetic disorder while a mammal was still a fetus.

Other groups studying genetic editing techniques hope the innovative study could shed new light in treating genetic issues while a fetus is developing. This research could impact the over 8 million children born each year with birth defects or other genetic disorders. These issues are often discovered via amniocentesis. However, there aren't treatment options to help a baby in development prior to its birth.

These findings were published in a recent edition of Nature Communications. In it, the team details why this particular gene editing process could be so impactful.

"Early in embryonic development, there are a lot of stem cells dividing at a rapid pace. If we can go in and correct a genetic mutation early on, we could dramatically reduce the impact the mutation has on fetal development or even cure the condition," said Danith Ly, professor of chemistry in Carnegie Mellon's Mellon College of Science. 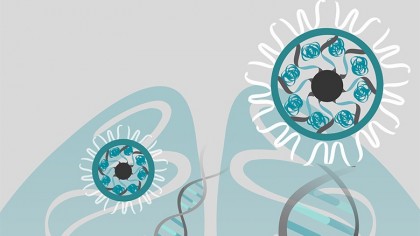 The team used a peptide nucleic acid-based gene editing technique that had previously cured a genetic blood disorder in adult mice. Peptide nucleic acids (or PNAs) are synthetic molecules created when researchers mix a synthetic protein structure with the nucleobases in DNA and RNA. The PNAs used in this study were created at Carnegie Mellon's Center for Nucleic Acids Science and Technology (CNAST), one of the global leaders in developing these unique synthetic molecules.

The researchers put the PNA complex into the amniotic fluid of pregnant lab mice. The mice all had offspring which carried a mutation in the beta-globin gene. That mutation would normally lead to beta thalassemia -- a genetic blood disorder that causes the body to drastically reduce the amount of hemoglobin it produces.

The researchers only injected the PNA once during the mice's gestation period, and that one injection resulted in 6 percent of the mutations correcting themselves. However, that's all the mice subjects needed in order to experience drastic changes and improvements in the genetic condition. It was enough of a change for the researchers to consider the mice cured of the condition. The hemoglobin levels were all found to be within a normal range after the PNA injections, and the researchers estimated much higher survival rates.

The team also noted this style of gene treatment might be preferable over popular and controversial gene therapies like CRISPR/Cas9.

"CRISPR is much easier to use, which makes it ideal for laboratory research. But the off-site errors make it less useful for therapeutics," said Ly. "The PNA technique is more ideal for therapeutics. It doesn't cut the DNA, it just binds to it and repairs things that seem unusual. We looked at 50 million samples and couldn't find one offsite error when we used our PNA gene editing technique."

In a First, Genetically Modified Pig Heart Transplanted Into a Human