Rhinoceros Embryos Made in Lab for the First Time Ever

Scientists are using a combination of assisted reproduction techniques and stem cell technology to save the species from extinction.

The research may also be a key to saving the NWR line currently considered functionally extinct since the only two remaining animals of the species are both females. "Our results indicate that ART could be a viable strategy to rescue genes from the iconic, almost extinct, northern white rhinoceros and may also have a broader impact if applied with similar success to other endangered large mammalian species," reads the study.

"These are the first in vitro produced rhinoceros embryos ever. They have a very high chance to establish a pregnancy once implanted into a surrogate mother," said Prof Thomas Hildebrandt, Head of the Department of Reproduction Management at the German Leibniz Institute for Zoo and Wildlife Research in Berlin. In this case, female SWR would be chosen as surrogate mothers for the disappearing NWR species.

For the study, the scientists collected oocytes from SWR females in European zoos and shipped them to Italian reproduction lab AVANTEA. "In our lab we were able to develop procedures to mature the oocytes, fertilize them by intracytoplasmic sperm injection (ICSI) and culture them. For the first time we had rhino blastocysts -- an early stage of an embryo -- developed in vitro, similarly to what we do routinely for cattle and horses," said Prof Cesare Galli, from AVANTEA.

For fertilization, the team then used cryopreserved semen from deceased NWR males resulting in the hybrid embryos. The group is now prepared to collect oocytes from Earth's last remaining two NWR females, currently residing at the Ol Pejeta Conservancy near Mount Kenya, to attempt another in vitro fertilization with only NWR specimens.

However, with only two NWR females left and semen from only four NWR males available, scientists need to look beyond assisted reproduction if they ever want to produce a self-sustaining population of NWRs. As such, the team is now experimenting with stem cell technology. 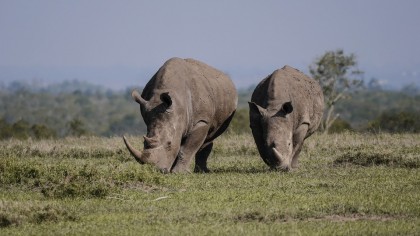 "In the future our goal is to produce in vitro primordial germ cells from iPS cells (induced pluripotent stem cells) obtained from somatic cells, cryopreserved in the past, of several NWR individuals. In a second step these germ cells will then be transformed into eggs and sperm," explained Dr. Sebastian Diecke, stem cell expert at the Max Delbrueck Center for Molecular Medicine in the Helmholtz Association in Berlin, Germany.

The scientists are in a race against time as nefarious human activities have been ravaging NWRs for decades, making the species one of the most endangered on Earth despite many conservation efforts. However, the team seems optimistic that they have finally found a solution.

"This research is groundbreaking. We are witnessing the development of a method that can help to compensate the negative impact of humans on nature," concluded Steven Seet, Head of Press & Communications at the Leibniz-IZW, remarks.