The Virgin founder and billionaire just announced a partnership between Hyperloop One and regional governments in India for a new hyperloop route.

Virgin's founder and British billionaire entrepreneur Richard Branson recently announced that he would be building a high-speed connection in India. The hyperloop would connect Mumbai and Pune -- both cities found in the Indian state of Maharashtra. According to the company, it would take travel by train from 3 hours to just 25 minutes.

"We expect the high-capacity passenger and cargo hyperloop system to create tens of thousands of jobs, helping to attract new business and investment in the region," Branson said. "The 100 per cent electric, efficient system will also ease severe expressway congestion and could reduce greenhouse gas emissions up to 86,000 tons over 30 years."

The Virgin conglomerate -- which includes technologies ranging from aeronautics to cell phones to music -- signed an agreement with the local governing bodies in India to begin an extensive feasibility study, according to Branson in the press statement.

Branson noted in a press statement from Virgin that the infrastructure addition could have deeper implications than even he sees at the present moment.

"I believe Virgin Hyperloop One could have the same impact upon India in the 21st century as trains did in the 20th century. The Pune-Mumbai route is an ideal first corridor as part of a national hyperloop network that will dramatically reduce travel times between most of India’s major cities to under two hours." 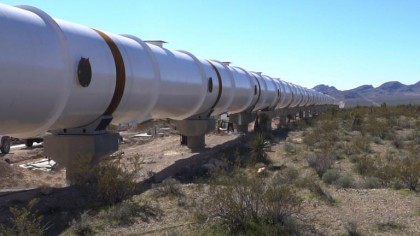 Hyperloop One Reveals 11 Potential Routes for Its Debut in the U.S.

In addition to connecting riders between these two massive cities in India, the hyperloop would also stop at the proposed Navi Mumbai International Airport which is underway near Mumbai. With stops to and from the airport in mind, Virgin estimated that the hyperloop shuttles would carry over 150 million passenger trips each year. He said that success could "create a thriving, competitive megaregion" not just around Mumbai but also throughout the country.

The hyperloop itself is not something exclusive to Virgin, nor is it exclusive to its current headline-making competition like Elon Musk's Boring Company. Virgin actually partnered with the US-based Hyperloop One company to speed up the production and functionality of a full-system hyperloop.

Could These World Maps Be the Future of a Connected #Hyperloop? Hit link in bio for story

That functioning hyperloop continues to boast impressive estimated top speeds. Currently, the company estimates that passengers would travel at speeds topping out at 670 miles per hour. And, as the company's Q & A page noted, that's over 10 times faster than traditional rail cars.

The ultimate goal for the Hyperloop One project is to have systems up and running by 2021. Current benefits from the project are estimated at $55 billion, but no word as to precisely how much the hyperloop system would cost.

Via: Virgin, The Hindu

Culled Mink Rise from Their Graves, Spark Fear in Denmark

All You Need To Know About the Chinese Space Program