If you're a 90s kid (or older), then you would understand the sentimental value of the old school Microsoft Paint feature. From random doodling to expressing your inner Picasso drawing skills, this Windows feature has definitely left a mark in the digital lives of those who grew up in the modern age of home computers. Originally, Microsoft listed down the feature to be "deprecated" as part of the Windows 10 Fall Creators Update that will be implemented later on this year. Meaning, the 32-year-old application wasn't really saying goodbye for good. Instead, MS Paint is "not in active development and might be removed in future releases", as Microsoft put it. 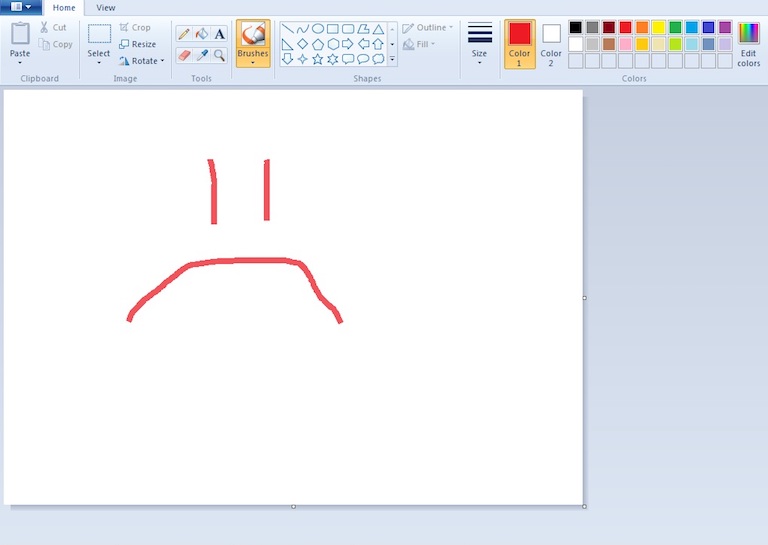 The news broke out in social media where many reminisced their childhood artistry by drawing random scenes and abstracts on the beloved Windows painting tool.

Children of the future will never know the joy of spending hours doing this on Microsoft Paint #MSpaint pic.twitter.com/IY6kDxPdc4

The iconic feature was initially released with the very first version of Windows 1.0 back in November 1985 and has been included in every single Windows updates since then. Formerly regarded to as Paintbrush under the licensed version of ZSoft Corporation, the feature began as a simple 1-bit monochrome graphics application. But it was only with the release of Windows 98, Windows 2000, and Windows Me when MS Paint was enabled to save drawings in JPEG. Despite lacking depth, MS Paint was still the go-to app for manipulating images and quickly drafting drawings because of its simplicity and user-friendly tools.

Terry Myerson, executive vice president of Microsoft's Windows and Devices Group, expressed that the upcoming Windows 10 update is aimed to further modernize the future of computing.

"We designed Windows 10 to empower the creator in all of us. We’re excited for our customers to take advantage of the new features in the Windows 10 Fall Creators Update that will empower innovative experiences; a modern, unified design for cross-device experiences; and an easier path for developers to create for the future of computing".

It's not just MS Paint that will get axed when the said Windows 10 Fall Creators Update will take place. Outlook Express and Reader app are just among some of the other features that will be removed or deprecated in the coming months.

From the initial Windows 10 Creators Update this April 2017, Microsoft introduced the all new Paint 3D app that was available for installation with the classic Paint. But as the name suggests, the new drawing feature is equipped with 3D tools to create more immersive and high-quality images. Paint 3D's current version is also enabled to provide basic 2D image editing services. However, the new 3D painting application is not an upgraded version of the traditional feature.

Although MS Paint was never really one of those game-changing features like Excel or Powerpoint, it still played a well-regarded role in the hearts of those who grew up with no other gadgets apart from a home computer. Others even consider MS Paint as the founding block of the popular social media culture known as memes.

Rest in peace mspaint, you made memes possible, and therefore revolutionary politics

MS Paint is here to stay...over to the Windows Store, that is

As the MS Paint generation took to social media to express their sentiments about MS Paint's impending fate, Microsoft did not turn a blind eye. The multinational technology corporation released a short blog post to clarify MS Paint's ultimate status when the Windows 10 Fall Creators Update takes over.

Megan Saunders, General Manager of Microsoft's 3D for Everyone Initiative, expressed Microsoft's appreciation to all those who outpoured their concerns over the news that MS Paint was going to be axed.

"If there’s anything we learned, it’s that after 32 years, MS Paint has a lot of fans. It’s been amazing to see so much love for our trusty old app. Amidst today’s commentary around MS Paint we wanted to take this opportunity to set the record straight, clear up some confusion and share some good news".

Saunders pointed out to fans where they can access and download the trustworthy app in the future should they wish to still have it on their computer.

"MS Paint is here to stay, it will just have a new home soon, in the Windows Store where it will be available for free"

Saunders added that even the classic MS Paint tools that everyone is familiar with will be included in the all new Paint 3D app.

"In addition to the new 3D capabilities, many of the MS Paint features people know and love like photo editing, line and curve tools, and 2D creation are in Paint 3D".

Microsoft has not confirmed when the actual Windows 10 Fall Creators Update will happen. However, some sources predict that October 2017 is the month when the legacy of MS Paint will be permanently 'deprecated' or superseded by Paint 3D.