This Year's Robo-One Battles Will Include Fully Autonomous Robot Fighting

Robo-One has been featuring biped robotic battles since 2002. The robots square off in three rounds of 4.5-minute battle. For the first time in history, Robo-One welcomed fully autonomous robotic battle to the ring earlier in April of 2017. Soon, on September 23rd to September 24th, Rob-One will be hosting the second annual autonomous robot fight.

Below is a video featuring the first Robo-One autonomous battle highlights.


The Rules of Autonomous Robot Fighting

The rules of the game are simple. Essentially, two robots are entered into a ring and must battle with no interference or human influence. The robots can be wirelessly connected to an external computer, but the computer must give all the movement and attack instructions for the robot.

There are three rounds of four and a half minute battles in which two robots pit-off in a boxing style round of robot fighting. The goal is to knock the other robot over or incapacitate it. The robots gain points for every successful attack and generally staying on their feet.

So far, weapons have not been introduced, but for good reason. The robots do not know who or where the enemy is. They must scan their immediate surroundings and discover where the enemy is, and where they move around in a position to initiate an attack. 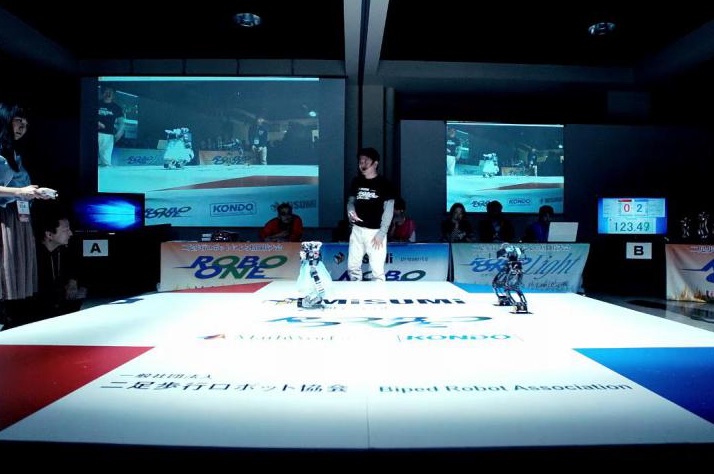 Spectators line outside recording the event. As of yet, there are no specific rules regulating the use of digital recording equipment used by the spectators. In the ring, the robots encounter indoor lighting, sunlight, infrared light from cameras and other possible disturbances. Some of the digital equipment also uses flashes or other photographic lighting which, as the rules outline, is part of the battle. The participant is responsible for taking into consideration countermeasures to ensure the robot recognizes the disturbances and does not act upon them.

Instead, the robot must recognize the enemy and track it, ensuring it does not confuse a spectator for an enemy. Making the battle specifically challenging are the rules restricting the implementations of lines outlining the sides of the ring. With no markings or outlines to assist the robot in navigating the rings, the robots must discover and initiate an attack.

The rule is intended to restrict robots from sweeping the ring and randomly discovering the enemy fighter. Instead, the robots must recognize and make decisions to navigate, attack, and if possible, defend and counter an enemy.

The rules are incredibly strict, ensuring the robots are fully autonomous with human-like characteristics. For example, the robots must have two legs and a center of gravity higher than the axis of forward and back movement at the very top of the legs. The rule forces the robot to maintain balance at all times. Furthermore, they must be spread apart with the capability of stepping farther than 10mm. The robot soles must also not cross over any part of the opposing foot, making balancing more of a challenge. 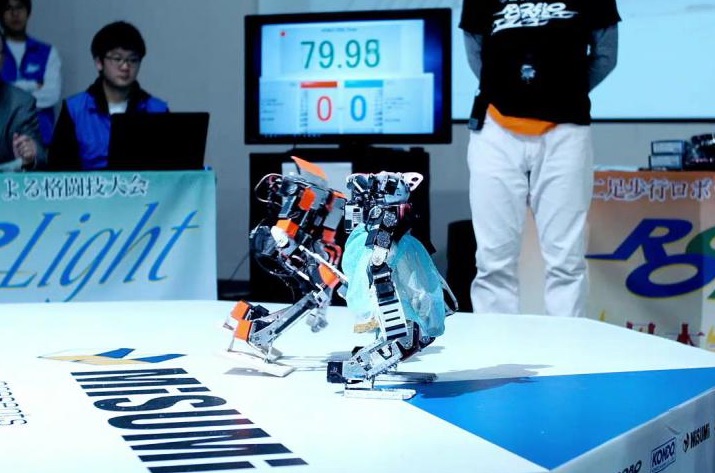 The Types of Autonomous Robot Fighters

Other robots opt for more rudimentary technologies such as infrared or ultrasonic arrays. Instead of complex algorithms determining the distance and location of robots, the simple sensors detect opponents by recognizing small disturbances in the closest proximity to them. The empty ring with no obstacles makes the technique particularly fast, and therefore effective at guiding in the bots to make an attack.

The sensors send out a signal which then recognizes which object was the closest. The process still uses sophisticated programming, but it is an older and much more simple process than time-of-flight cameras.

The simple robots were not at a disadvantage, however. Remarkably, some of the most successful robots featured simpler sensors.

Overall, 16 robots competed in a series of matches to determine the toughest autonomous robot of them all to win the 100,000 yen award (almost $1000 US).

In early September, Robo-One will be hosting the second autonomous robot fighting challenge. 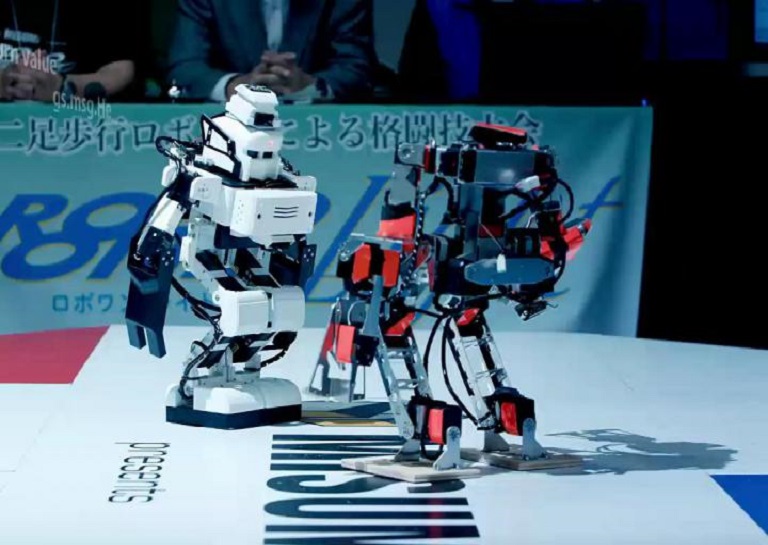 Somewhat expectedly, most of the battles were uneventful and full of clunky robots roughly navigating their way aimlessly throughout the ring. Other robots successfully found their enemy and unleashed a series of punches that knocked their opponent, and sometimes themselves over.

In more recent years, more and more scientists have expressed grave concern about the development of autonomous robots with a combative role. However, companies are ignoring citizen concerns and are developing the robots regardless.

So far, the US has developed sophisticated robots capable of navigating difficult terrain such as WildCat and Handle. The Russians have also made advancements in a robot, FEDOR, capable of driving wielding a weapon.

Russia claims the terrifying gun-wielding machine is being trained to shoot to improve the Android's motor skills and decision-making. Although, the recent advancements are making people question the morality of designing a robot which can inflict pain, or potentially kill.

Robo-One is making autonomous fighting robot technologies more transparent and available to the common person. People can use the technology to learn more about robots. At the same time, the challenge is influencing a new wake of robots that fight independently, raising the concern of whether or not they will turn on humans.

The rules governing autonomous robots are still murky and undeveloped. It is uncertain what the future of robots will hold, but one thing is certain, the second autonomous robot fight will be taking place September 23rd.