Robot Chefs Could Take Over Our Kitchens Very Soon

Could robot chefs make real ones obsolete? If you love to cook at home then it's unlikely you'll ever desire an automaton to help you around the house. If you love to eat out, you might not be bothered who makes it so long as it is delicious. With the seemingly unstoppable march of machines, we are likely to see robot chefs very, very soon.

There will likely always be a place for handmade recipes, even in the distant future, but fast food is likely to be one of the earliest "victims" of the rise of the robot in the workplace. Let's take a look at some examples that are in development. These babies are set to revolutionize our culinary needs forever.

Moley, a UK based robotics company, is set to unleash one of the world's first robotic kitchen. Their product will feature an advanced, fully functional robot integrated professional and domestic kitchen. The company claims that their robot chefs will have the skill and flair of a master chef. Their prototype even premiered at the Hanover Messe International Robotics Show to widespread acclaim.

The device consists of a pair of fully articulated robotic hands that can, in theory, reproduce the entire function of the human hand. Apparently, it is even capable of providing sufficient dexterity to rival human chefs with respect to speed, sensitivity, and movement. Moley managed to employ the services of Master Chef Tim Anderson who won the BBC Master Chef title. His cooking skills were recorded for use on the system. Their robotic chef is able to mimic his every motion, nuance and flourish. All of this can be replayed exactly as if Tim was there, except with robot arms and hands.

The hands have multiple joints with numerous actuated degrees of freedom, tactile sensors, and sophisticated control systems. These all allow their MK1 Robo Chef to download a recipe and reproduce it for you exactly as the Master Chef would have done.

It won't be cheap

Moley's household cooking solution will not be cheap. When commercially released they should costs around $15,000 (£10,000), practically a steal right?

The aim of the developers of the robot is to support it with thousands of recipes in the form of apps. Each and every lucky owner will even be able to record their own recipes thanks to a built in motion capture device. Once recorded and saved, the robot chefs can mimic your every move. Their hands are to be produced by Shadow Robot who designed a highly articulated system of 20 motors, 129 sensors, and 24 joints.

Rich Walker from Shadow Robots said that the robotic arms could cope with many of the uncertainties when cooking, for instance, when beaten eggs peak.

The robot chefs are set to hit the shelves very soon

Moley hopes to launch a consumer version of their prototype as soon as 2018. These will be, according to Moley, "Sophisticated yet compact, it will feature the four key integrated kitchen items of robotic arms, oven, hob and touchscreen unit."

The plan is to provide a kitchen that is fully operated by touch screen or even remotely via smartphone. Why order a takeaway when you can order your robotic chef to cook for you? No longer will there be an excuse for not cooking at home. When the robot is not in use the robotic arms actually retract from view. Operational glass screens close off the unit to ensure safety when no-one is at home.

Moley's product has, as you'd expect, excited many industries and sectors. They have even been approached by major companies in the restaurant, airline, kitchen developer and chef training schools industries. We can't blame them.

Housing developers have even taken great interest in Moley's robot chefs. They have ongoing discussions with a group that manages $20 Billion in housing assets and new builds. They see the potential for bringing a unique feature to their housing stock allowing for them to create a premium set of units that could command a higher price tag. New buyers could also choose to add these kitchens as an option during the specification stage.

San Fransisco could soon see the world's first fully automated robot-powered burger joint. In 2012 Momentum Machines debuted an interesting machine that could fire out 400 made-to-order hamburgers every hour. Their robot burger chef is fully autonomous, it can slive toppings, grill the patties and assemble the burger all on its own. It can even package them without the need for any human help. Amazing.

After this unveiling everything went pretty quiet. That was until January of 2016 when it was learned that the San-Fransisco start-up had actually applied for a building permit to convert a ground-floor retail space into a restaurant. Job listings started to crop up offering tantalizing information on how the restaurant might actually work.

Although the listing has since been deleted, according to BusinessInsider it contained the following information.

"This location will feature the world-premiere of our proprietary and remarkable new advances in technology that enable the automatic creation of impossibly delicious burgers at prices everyone can afford". Interesting. 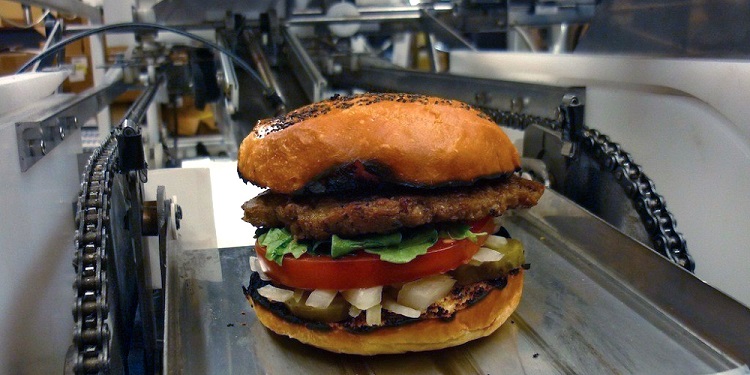 It would need some human assistance

As promising as a fully automated burger maker is, it would appear to need some human help. Although the robot will be cooking it would need some assistance to fill the gaps.

"[You will] learn to do everything that's part of running a restaurant in San Francisco," the advert explained. It detailed the need to take customer orders, schedule shifts and take out the trash, of course.

Apparently, the role would also challenge the applicant to "pick up some new skills that aren't part of typical restaurant work," such as software troubleshooting, market research, and product development, intriguing.

Momentum Machines have said that the average fast food joint spends around $135,000 a year on burger line cooks. This doesn't even touch on the health and safety requirements in a usually highly chaotic working environment. Momentum believes that by replacing human's with machines the adopting company will benefit from reduced liabilities, management duties and of course save on floor space.

This would allow companies who follow suit to make great savings on employment and associated costs. This could be fed back into the business to improve the quality of their products. Or, of course, be used to increase automation in other areas of the kitchen. It is likely that companies could soon replace low-skill workers en masse.

McDonald's staff actually held a protest outside their corporate headquarters in Chicago. They were demanding higher wages. Increased tensions like this between the ground staff and management could well backfire on disgruntled staff. Automation of the kitchen in these kinds of businesses could render much of the back of house staff redundant.

Momentum has tried to reduce tensions that their burger machine might create "We want to help the people who may transition to a new job as a result of our technology the best way we know how: education".

Automate for a brighter future

In a 2014 Pew Survey, 1,900 technology experts agreed that robots, including robotic chef solutions, will be a normal part of our lives by 2025.

With automation set to infiltrate many industries, we should start planning for the potential fallout. Industries like health care, transport and logistics, customer service and home maintenance will all be affected. Experts are torn on the actual impact this might have on the job market.

For the 52% who felt upbeat about it, the rationale was that we have been shedding "traditional" jobs with machines for centuries. In the early 20th Century, most people were actually farmers and factory workers. The huge technological revolution we have seen over the last century has seen manpower replaced by machines to improve productivity and render human contributions to around 2% of the workforce today.

As we know, this has not led to massed unemployment in the population. In fact, there has been a huge proliferation of new jobs that couldn't even have been dreamed of by our great grandparents. Massed adoption of technology in our industries has greatly improved our quality of life. Could full automation take this trend to the next level?

Of course, there are doubts

Two MIT economists, Eric Brynjolfsson and Andrew McAfee, do have their doubts. They believe that more advanced machines are just over the horizon. Though their long term impact will be beneficial overall, it will lead to short term strife. They will displace many human workers who may have great difficulty retraining to find other employment.

Though we have had this problem before, the pace of development and improvement in our modern world could cause problems. The transition period would be difficult to navigate owing to the speed, depth, and breadth of the change that will happen.

But we shouldn't be too worried. The job market today is much more flexible than it used to be, you can easily search for work online for instance. Geography is increasingly becoming irrelevant as people start to work remotely. Information can be gathered from anywhere with an internet connection. You can even get qualifications online nowadays. It is not uncommon for workers to jump between industries throughout their careers either.

As uncomfortable as this subject is on the surface, we should embrace the coming liberation from back breaking, and frankly tedious, work.

This could be very profitable

IFR predicts that for the period until 2019, sales should increase to around 333,200 unit with a value of $23.1 Billion. Domestic task robots should see an increase to 31 million units between 2016 and 2019. They believe this should represent around $13.2 Billion in sales revenue.

In the final quarter of 2016, Moley sought £1 Million from crowd sourcing. Since their debut, they have managed to raise more than £400,000 from over 60 investors.

At the moment the use of robotics in the home is in its early stages. Robotics and automation are one of eight technologies that could help rebalancing economies, like the UK.

With Moley's progress so far, it will only be a matter of time before any issues are resolved for domestic applications. Could it even build a new income stream for ambitious hobbyists? Perhaps future robot chefs could teach us how to cook, though that might defeat the object of buying one in the first place. Who knows. For now, we can only dream of the possibilities this could bring us all. Once the price tag has dropped considerably of course.

For some, the idea of having a machine cook for you might seem like sacrilege. There are many out there who actually enjoy cooking. For those in the culinary industry, the prospect of losing your job to a machine must be daunting. This technology could alleviate the workload at home and put you out of a job, literally a double edged sword of sorts. Whatever your views, the introduction of robot chefs could change the way we eat forever. What are your thoughts? Would you install one in your home? Let's start a conversation.