Robot Choir Singing Beethoven is the Stuff of Nightmares

If you have been browsing the internet looking for something to fuel your nightmares, you just found it. Engineers behind the development of a robot named Pepper, have just created a robot choir of 15 of the creepy looking robots and programmed them to sing Beethoven's Symphony No. 9. Now, you would think robots would have perfect pitch and their rendition of a beautiful classic would be lovely . . . there is nothing further from the truth. The robots 'harmonize' to create what sounds like the future death march our robot adversaries will sing as they conquer the last human settlement. Be prepared, you won't be able to sleep for a while after watching this.

The best part of the video is how the humans singing along with the robot choir react after they have finished singing; they seem like they are excited by the terrifying madness they have just created. While I suppose creating the future death march of our robot overlords is an achievement of such, it is probably not something to get that excited for. Joking aside, these robots are still really creepy, as technologically advanced as they may be.

Pepper the robot is built as a human companion bot and it's creators even state that it can recognize human emotion and react accordingly. There are actually over 140 stores in Japan using the "friendly" robot to greet guests and welcome visitors. This robot is also claimed to be capable of memorizing your habits, tracking your movements, and picking up on your personality traits. That's not creepy at all, not one bit. 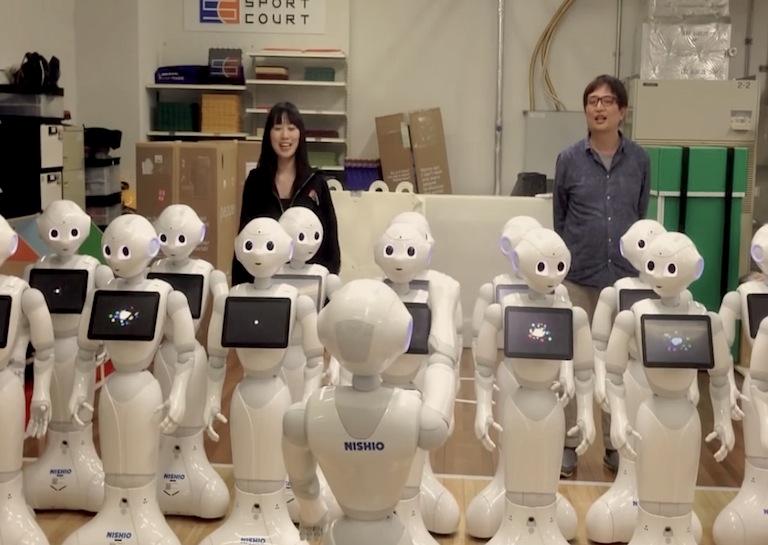 While I am looking forward to the day when robotic helpers are integrated into our lives, these little guys aren't quite doing it for me yet. Something about giant black eyes and a large screen on their chest just doesn't scream "helpful" to me. Anyway, robots are cool, but maybe lets keep the artistic expression and singing to humans for just a little while longer.