Robot Density Rises Across the Globe According to New Report

Globally the average of robot density has risen to 74 robot units per 10,000 employees in the manufacturing industries. The average robot density in Europe is 99 units, with 84 in the Americas and 63 in Asia.

The automation of production has been gaining speed around the globe. With 74 units, the new average of robot density in the manufacturing industries compares with 66 units in 2015, according to a press release by the International Federation of Robotics (IFR).

“As a result of the high volume of robot installations in Asia in recent years, the region has the highest growth rate. Between 2010 and 2016, the average annual growth rate of robot density in Asia was 9 percent, in the Americas 7 percent and in Europe 5 percent.” Junji Tsuda, President of IFR, said.

Robot density is an excellent standard for comparison to compare the differences in the automation degree of the manufacturing industries in various countries, according to Tsuda.

China fastest in the world

The development of robot density in China is the most rapid in the world. Between 2013 and 2016, the density rate rose from 25 units in 2013 to 68 units in 2016 due to the significant growth of robot installations. At the moment, China’s robot density ranks 23rd worldwide.

The Chinese government also has plans to make the country into the top 10 most intensively-automated nations by 2020 globally. The country’s robot density is targeted to rise to 150 units by then.

The Republic of Korea has the highest robot density in the manufacturing industry and the country has held this position since 2010. With 631 units, its robot density exceeds the global average at least eight times. This high growth rate results from continued installations of a high volume of robots particularly in the electrical, electronics and automotive industries.

Japan ranked fourth in the world with 303 robots installed per 10,000 employees in the manufacturing industry in 2016.

Trend to automate production in the US

Robot density in the US increased significantly to 189 robots in 2016, with the country ranking seventh in the world. The main factor behind this growth is the continuing trend to automate production to invigorate American industries on the global market.

The automotive industry is the main client of industrial robots with approximately 52 percent of total sales in 2016. Robot density in Canada has reached 145 units in 2016, making it rank 13th globally.

Germany is Europe´s most automated country and ranks 3rd worldwide with 309 units. Between 2018 and 2020, the annual supply in Germany is forecast to grow by at least 5 percent on average per year as the demand for robots in the general industry and in the automotive industry rises. 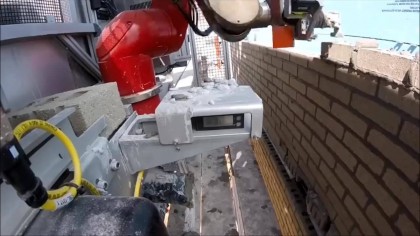 New Report Says Robots Will Take Over Construction Industry by 2020

EU members like Sweden has a robot density of 223 units, Denmark 211 units, Italy 185 units and Spain 160 units and enjoy a high degree of automation using industrial robots in the manufacturing segment.

France has a robot density of 132 units, ranking 18th in the world, but stands relatively weak compared to other EU countries.

The UK has a robot density below the world average of 74 units with 71 units, ranking 22nd. The general industry is in need of investment to modernize and increase productivity and the low robot density rate shows this fact.

Slovenia is the most accomplished among the eastern European countries with 60 percent of the total robot supply used mainly for the automotive industry, 33 percent more than in 2015.