A humanoid robot developed by the Heriot-Watt University in Scotland has been fired just weeks after starting work at a busy supermarket.

There is something extremely satisfying about robots making a mistake. Perhaps it is linked to our deep down fear that singularity is inevitable, but whenever there is news of a robot failure, it seems to be linked with a deep sigh of relief.

The latest hilarious robot fail story comes from Scottish University Heriot-Watt who developed Fabio, a humanoid robot designed to hold conversations with humans. Fabio works in a similar way to virtual personal assistants Siri and Alexa in that his speech is processed elsewhere before ‘speaking’. The developers of Fabio were keen to test out their creation in real-life situations and looked about for volunteers. Scottish supermarket Margiotta agreed to take Fabio on as a meet and greet intern. But things did not go as planned.

Fabio greets customers with a hug

Initially, it seemed Fabio was doing a good job. The all white robot was able to say hello to customers as they entered the store, even giving them a high five or offering a ‘hello gorgeous’. Fabio, however, did not have the work ethic required in a busy supermarket and it soon became evident that while Fabio was happy to chat to customers about the weather and other common topics if he was asked anything directly about the store itself he was suddenly much less friendly. Reportedly when asked a simple question like “Where is the wine?” he responded, "in the alcohol section". Similarly, when asked where the cheese was, he would answer with thinly veiled hope, "aisle three".

Store owner Luisa Margiotta described Fabio's behavior saying, “Instead it just gave a general location, for example, 'cheese is in the fridges', which was not very helpful.” Fabio, who clearly couldn’t handle the job he’d been tasked to do was given a more simple job, in the hope he might work a little harder.

What happened when a robot went to work in a Scottish supermarket https://t.co/Mto4zPRhnm

Fabio’s next job was to hand out samples of sausage in the cold foods aisle. However, this was a complete failure too. It seemed a robot handing out cold cut samples is a terrifying prospect and customers actually went out of their way to avoid him. A human employee given the same task was able to attract approximately 12 customers to try the sample every 15 minutes, In the same amount of time, Fabio was able to attract just two. Unfortunately, that was the last straw for Fabio’s managers who had to break the news to the robot that his time at the supermarket was up. He was getting the boot.

Fabio, it seems took the news quite well, but his co-workers were devasted. 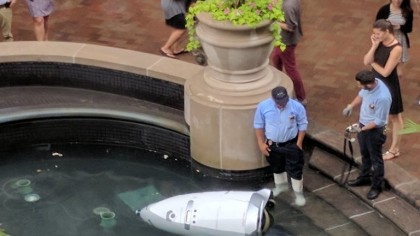 On hearing Fabio had been fired a Margiotta worker apparently broke down in tears. “One of the things we didn't expect was the people working in the shop became quite attached to it," Dr. Oliver Lemon, director of the Interaction Lab at Heriot-Watt University, said. “It was good in a way, because we thought the opposite would happen and they would feel threatened by it because it was competing for their job." It turns out Fabio's colleagues didn’t feel worried the talking robot would take over their jobs, but delighted in his company as it removed the parts of their daily tasks they hated the most- talking to customers. “In actual fact, they thought it was an enhancement because it was able to deal with frequent and boring requests, like customers constantly asking where things are, which I think they found quite helpful,” added Lemon.