Robotic Chefs in Boston Give a Glimpse of Future Restaurants

Spyce - The world's first restaurant with robotic kitchen is now open for orders!

Daniel Boulud has a chain of successful restaurant enterprise spread across the globe. So, when four MIT graduates approached him with an idea of a robotic kitchen, Daniel was excited to include it in his successful venture portfolio.

MIT grads Michael Farid, Brady Knight, Luke Schlueter, and Kale Rogers are the men behind this marvelous venture. They were posed with the perennial question which has haunted broke students for a long time.

Where do we get healthy food at an affordable price? Spyce is the answer to this problem.

Spyce is a pretty place with a refreshing look and trendy design elements. Ordering Kiosk is the place where you would be headed first.

You can order your food from intuitive kiosks which offer a broad range of palatable combinations. The most exciting part is high-level of customization offered by kiosks, which let you personalize your order without messing it up. 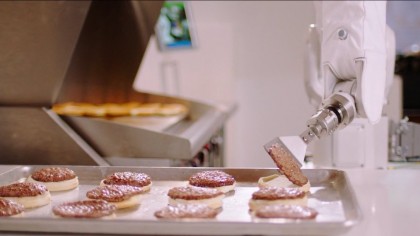 The dishes are designed by chef Sam Benson who has made tasty meals without human intervention possible. All the required ingredients are picked by a runner and taken to one of the seven robotic chefs.

These chefs are large mechanical woks which cook your food with magnetic induction. Once a dish is cooked, it is poured into a bowl.

Human workers garnish the meals and make it presentable. The woks are cleaned by a steam jet before they take in new ingredients.

The engineers have made no attempt to hide the mecha-woks, so you can see them preparing your meal. Even if automation lies at the core of Spyce, it employs a big human staff as well.

Fine works like chopping vegetables, arranging ingredients, garnishing, etc. are still human Forte. The speed and hygiene are the prime benefits of this autonomous system.

You are supposed to get your order within 3 minutes of its placement. Michael Farid, co-founder of Spyce, clearly puts that their robots are not a replacement of human workers but complementary to them.

The hard work, hot work, washing, and cooking are automated to help human workers focus on hospitality. There is a human element to food which can never be replaced.

The novel innovation of the Spyce is not the only perfect treat to its customer. The food offered is at par with leading names in the sector and quite affordable.

It is not the first time that robots or autonomous systems are employed in the industry. London-based Moley Robotics is working on a prototype which manages all the kitchen work on its own.

Several other similar ventures are in progress in other parts of the world, especially China and Japan. Spyce’s automated chefs may not seem ‘smart robot’ as they do not incorporate decision-making, but their acceptance shows the upcoming change in the food and hospitality industry.

Spyce is the ‘archaeopteryx’ of the restaurant industry, a transition between a human-dominated kitchen and robot-managed restaurant services.