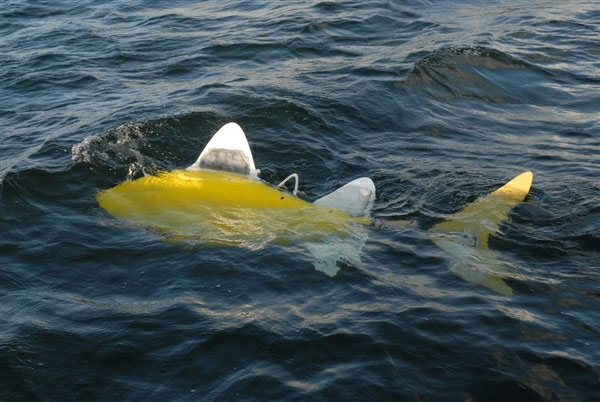 This is one interesting development for monitoring the pollution in ports and harbors, made by BMT Group. Prototypes are tested in northern Spain, in the waters of Gijon harbor. Most of underwater robots use propellers for propulsion, but it’s not the case. This new vehicle uses fish-like tail for moving forward. The fish is nearly 1.5m long and is made of carbon fibers and steel. The sensors used to “catch” contaminants in the water are micro-electrode arrays and are able to detect heavy metals like copper and plumbum. They can detect also salinity, phenols and oxygen levels in this configuration. But, as Dr. Luke Speller (senior scientist at the research division of BMT Group) stated, the robotic fish provides the option to pull out the chemical sensor unit and replace it with another sensor unit, capable to detect different types of contamination. Battery keeps the fish “alive” for approximately eight hours and then needs to be recharged.

These prototypes have intelligent control unit which allows the fish to hunt down the source of contamination. They are able to work in a team, using acoustic signals to communicate with each other. The other option is to work solely, and in both cases they can report back to the port.

However, these new tools against the contamination of coastal waters come some sort of expensive – each prototype costs 20 000 British pounds.