Robotic Hands that Teach Themselves to Move

A group of engineers created ADROIT one of the most dynamic manipulative robotic hands which taught itself how to twirl a stick between its fingers.

Hand movements are some of the most complex forms of biological movements that require bending, pivoting, and sensing friction that humans can often perform effortlessly. The movements require complex biological systems which are hard to mimic, especially for robots. Hand dexterity is one of the most distinguishing capabilities humans have come to evolve with. Human hands have become an integral part of human activities, so if robots are to be integrated into our human-centred world, they must possess hand manipulators and controls similar to the abilities of humans.

An engineering team from the University of Washington decided to tackle the complex challenge and try and recreate robotic hands that could mimic the intricate motor controls humans are renowned for. The team included Vikash Kumar, Yuval Tassa, Tom Erez, Emanuel Todorov who created a robotic hand that was able to perform shockingly similar to a human hand.

The hand was powered by 48 pneumatic actuators that controlled the degree and force delivered to hand and fingers. It is capable of moving faster than a human hand and able to replicate basic behaviors of a human hand. Overall, the robot cost a staggering USD $300,000.

The robotic hand was able to perform human tasks like typing on a keyboard, and more impressively, spinning a stick with its fingers. At first, the robot struggled with the task, but due to some clever computer software, it was able to “teach” itself to optimize the movement. 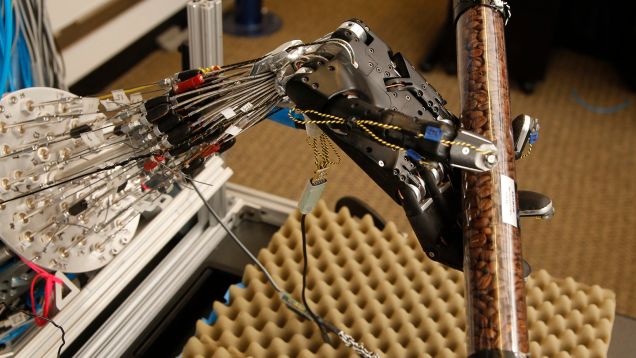 “Usually people look at a motion and try to determine what exactly needs to happen - the pinky needs to move that way, so we’ll put some rules in and try it and if something doesn’t work, oh the middle finger moved too much and the pen tilted, so we’ll try another rule. What we are using is a universal approach that enables the robot to learn from its own movements and requires no tweaking from us.” ~ Professor Emo Todorov to E&T.

It was able to manipulate the stick due to its quick hand movements which the robot’s algorithm analyses and then learns from to perform the task fluently and effectively, improving over time.

Any human who has attempted to twirl a stick using only their fingers can appreciate the concentration and hand manipulative skills required to perform the twirl precisely and gracefully. Small misdirection or inaccurately performed movements can cause the stick to go flying out of control. The robot performed a similar task, while although it started slow, it was able to learn from its experience and improve the motion until it looked almost natural.

However, some humans have hands that do not function at a high degree of efficiency challenging them at certain aspects of life. And sometimes a worker or person executing a task may require an extra set of hands that perform similar to a real set of hands. The students that created the five-fingered robotic hand could be the answer to many human activities including an extra set of hands for mechanics, to an assistant in the operating room to provide a steady and precise instrument that could save lives. What ever future applications the manipulative robotic hands will experience, it could very well be the future of helpful hands.

SEE ALSO: This has to be the most realistic robotic hand ever!