Medicine could be changed radically by the modern technology in a couple of years from now on. Few years later we may drink some sort of medical gadgets instead of the current chemical medicaments.

This thing may become reality if the invention of Mir Imran passes through successful trials. He invented a robotic pill purposed to replace injectable medicaments for chronic diseases such as diabetes. The pill is made of ingestible polymer and has hollow needles made of carbohydrates. The project is funded by Google.

The robotic pill is still not tested in humans, which means that it will take at least one year to receive approval from FDA. 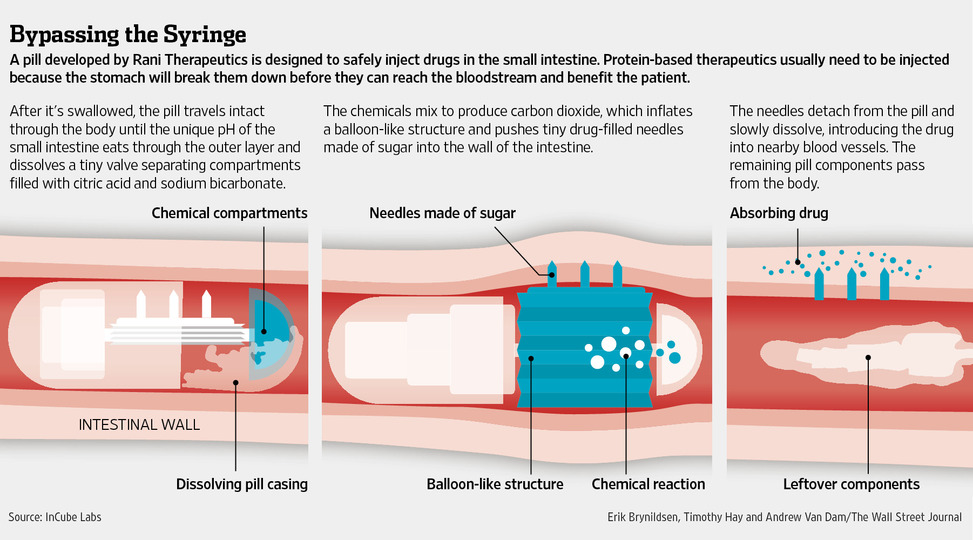 Mir Imran, who was born in India, founded InCube Labs. The company holds more than 300 patents and is responsible for over 20 medical startup devices, some of which have been acquired by companies like Medtronic Inc. Such device is the cardioverter defibrillator which is supposed to be implanted into the cardiac area to fix irregular heartbeats.

Funding was gathered by Rani Therapeutics, a startup company formed within InCube Labs to commercialize the robot pill, who attracted Google Ventures and VentureHealth as general investors.

Blake Byers from Google Ventures said: "This investment is not exactly in our wheelhouse, but we're open to people who can change our minds. This one really stood out as a huge clinical need; $110 billion is spent in the U.S. every year on biologics, all of them injectable."

Drugs for chronic diseases such as osteoporosis, diabetes and multiple sclerosis should not pass through the stomach because these drugs have protein nature and are decomposed by the stomach acids. This is why these drugs must be injected instead of being swallowed as pills.

The idea of the robotic pill is to be an "autonomic robotic delivery system" which will keep its ingredients intact from enzymes and acids long enough to deliver the drug where it is needed. The pill is activated by the usual digestive processes to maintain some functions without electronics.

When the pH level goes up in the intestine the outer layer of the pill is dissolved and allows for mixing of two chemicals that were separated until that moment – citric acid and sodium bicarbonate. This reaction leads to the generation of carbon dioxide which forms a balloon that surrounds the pill.

As mentioned above, the pill has needles or spikes made of carbohydrates. Those spikes penetrate the wall of the intestine and release the drug safely. The intestine wall has no pain receptors so the process should be completely painless. The balloon structure, including the polymer body, is then extracted from the human organism. The sugar needles are slowly dissolved after releasing the drug.

Pharmaceutical companies attempted many times to create insulin pills. Although they created pills strong enough to withstand stomach acids, the pills are also attacked by enzymes which significantly decrease the amount of the delivered drug.

According to Mr. Imran, Rani Therapeutics has shown that this robotic pill could be as effective as the injected drugs.

GitHub Removes All Restrictions for Developers in Iran After Two Years

UK and Japan Will Use Robotics To Decommission Old Nuclear Sites