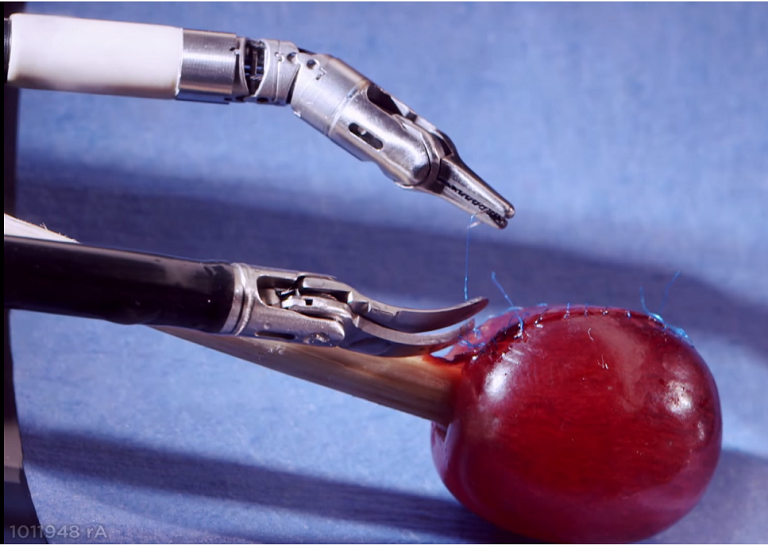 Grape skin being sutured back on [Image Source: Intuitive Surgical]

Intuitive Surgical, Inc, a global leader in medical robotic assistant technology developed a robotic surgeon so precise, it can stitch the skin of a grape right back on.

The robot responsible is called the da Vinci Xi Surgical System, an extremely high-tech robot that specializes in minimally invasive surgery. The robot has been approved by the  FDA who gave clearance for surgeons to use the robot to perform specialty operations back in 2014. The robot is currently being used at many locations across the U.S. to perform many different specialty operations.

Intuitive Surgical developed several models of the da Vinci Surgical System, each capable of providing minimally invasive surgery. The robots are not programmed to perform surgery on their own. A surgeon is required to sit inside the controller to perform a surgery. The operator's motions can be scaled, filtered, and then translated into precise motions while inside a patient's body.

The unit is equipped with high-definition, 3-D camera to help the visualization of the surgery to be almost as clear as real life. The camera also has the ability to scope in for a magnified view. The robot is equipped magnitude of devices to perform incredibly precise dissections and reconstructions deep inside the body.

In 2015, Intuitive Solutions performed a taped surgical procedure that had the robot stitch the skin of a grape back onto itself. The robot can perform surgeries that are incredibly complex and requires dexterous effort. With the robot's ability to zoom in close, surgeons can use the 3-D display to precisely perform many procedures. The can also be thoroughly sanitized to completely eliminate cross contamination and potentially deadly infections.

The company behind the robot envisions a future where robots will become more precise and become a standard in the operating room.

"Our goal is to develop technology that enhances surgical performance,"

"The da Vinci Xi System's new overhead architecture means that multi-quadrant surgery can be performed without repositioning the system, an innovation long sought by surgeons who perform complex procedures. We strive to provide the most advanced, least invasive option for surgery, and we are working hard to make minimally invasive surgery the standard of care."

Although the idea of a robotic surgeon may seem daunting at first, the da Vinci Xi Surgical System helps to alleviate some of the anxiety with their elegant demonstration of their robot in action. Of course, there is no chance of the robot gaining supreme intelligence and reconstructing an allegiance since the robot is entirely controlled by a human operator. The robot is currently performing surgeries across North America for a large array of operations, ranging from cardiac surgery to head and neck operations.