The band is fully made of scrap metal. The players seem to be alive. It's Kolja Kugler's One Love Machine Band!

The result he obtained ended up being not only a creative and artistic work but also a work of engineering design. Or, even a window into the future, you may think. A future where robotics and Artificial Intelligence are expected to be an integral part of the entertainment industry in the cities of the future.

Attendees at the Maker Faire Rome 2018 waited in anticipation for the next showtime, when Kolja Kugler's One Love Machine Band was going to play live on stage.

Celebrating invention, creativity, and curiosity the Maker Faire Rome is the European Edition of the Maker Faire, which originated in the San Francisco Bay Area in 2006. It started as an original project of the editors of Make Magazine, a publication that supports the digital culture, developing the individual and collective entrepreneurship.

In the video below, The One Love Machine Band owes the audience in a performance that looks as if it would have been taken from a science fiction movie.

"I am still not convinced that I'm doing robots," artist Kolja Kugler tells Interesting Engineering. "I am doing sculptures which move."

All his sculptures are made of scrap metal. "In the scrap metal I found a lot of moving parts such as pliers, and I built this face using pliers in the lower jaw. I made it just for the sculpture. But when it was finished, a friend of mine introduced me to the pneumatic piston, to the pneumatic system, and I put my first piston into the mouth of this face," he says.

"Then, I had the lower jaw moving. I saw some kind of life form coming up. So, I followed that up and 20 years later, I'm kind of the robot guy."

Challenges along the road

Kolja Kugler recognizes many challenges in his journey, obstacles he needed to sort out at the beginning of his robotic creations in order to get a fully functional, fully rocking machine band. He also acknowledges challenges he faces in the present, before or even during a show. 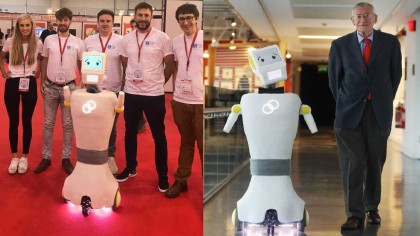 Stevie the Robot Wants to Help the Elderly

His first challenge concerned engineering. The technical side of his robot-sculpture creations became a problem he needed to solve since he doesn't consider himself as a very technical person.

"I am not interested so much in engineering primarily but I am interested in the final product," he tells Interesting Engineering. "I'm not trained in anything. Everything I make is very crude."

The job of making moving sculptures, or robots doesn't end after having the product ready. They need to be serviced and looked after, or they can collapse. They need to be in shape to keep the show going. According to Kolja Kugler, this represents a challenge as well.

"Robots are like persons, they are like moody persons. One minute they are like this, the next minute things are different, or a screw comes off somewhere. It's really hard to see. It seems irrational and illogical," says Kugler, who explains that coping with this can be a challenge, too.

Sometimes, during the shows the robots can have little problems, or ever faults, the artist and maker explains. "I see myself as a pit-stop mechanic. I have so many seconds to fix, improvise, or shut it down," he says.

Kogler then makes the best decision right on the spot. It's interesting for the audience as well to see that something unexpected can always happen and that it can be fixed right there on the stage, in front of the viewers. It's all part of a unique show!

The One Love Machine Band: Meeting the band members!

Each member of the band has a distinctive personality. This can be noticed while the band is playing, or when their maker speaks about them. The movement of the robot sculptures is made by using pistons and air pressure.

Sir Elton Junk was the very first robot that Kolja Kugler created. Elton is now the manager of the band. Sir Elton Junk sits in the shopping trolly during the show.

"He's the one with whom I stumbled upon robotics when I was building his face," Kugler says. "I dragged him with me once all over the world for five years. We had a two-minute comedy called Showbot."

The drummer is the baby of the band. His name is Rubble Eindhoven. Kolja Kugler managed to finish the drummer in less than a year. "He's now my most sophisticated robot movement-wise," says Kugler.

"The sculptures create characters of their own and then I follow the characters," Kugler explains.

The bass player was the first member of the band. His name is Roots Afreakin. He got the name because he was always freaking Kugler out.

"It took me four years to finish him. I wanted him to do something special, like playing the bass. When he was finished, I looked at his face and got the impression that he is from Africa and he holds the bass like a reggae bassman," says Kugler who is a big reggae fan.

Then there is the flock of birds. They are called the Flute Flock.

"It's a bunch of birds sitting on a TV aereal," says Kugler. There is one flute that belongs to each bird which is connected to the TV aereal.

"I'm at a point where I need a crew. I need help. But that's really hard to find," he explains. "Regarding that it's my show I have to keep it fresh."

Of course this also means some investment in making improvements and this is where another challenge comes into light: money. Even moving his workshop --a set of containers with a roof that he made by himself-- within Berlin can represent a challenge.

Kolja Kugler's robotic sculptures are in exhibition at the Wild Waste Gallery in Berlin, Greifswalder Strasse 80.