Agricultural engineers teamed up with robotic engineers to create the future of farming with a drastically new approach, using robots to farm as alternatives to manpower.

Perhaps it is time for farmers to put their feet up with robots that are already being used to inspect crops, dig up weeds, and now have become shepherds too. Commercial growing fields are astronomically huge and take thousands of man-hours to operate. One prime example is one of Australia's most isolated cattle stations, Suplejack Downs in the Northern Territory, extending across 4000 square kilometers, taking over 13 hours to reach by car from the nearest major town- Alice Springs. 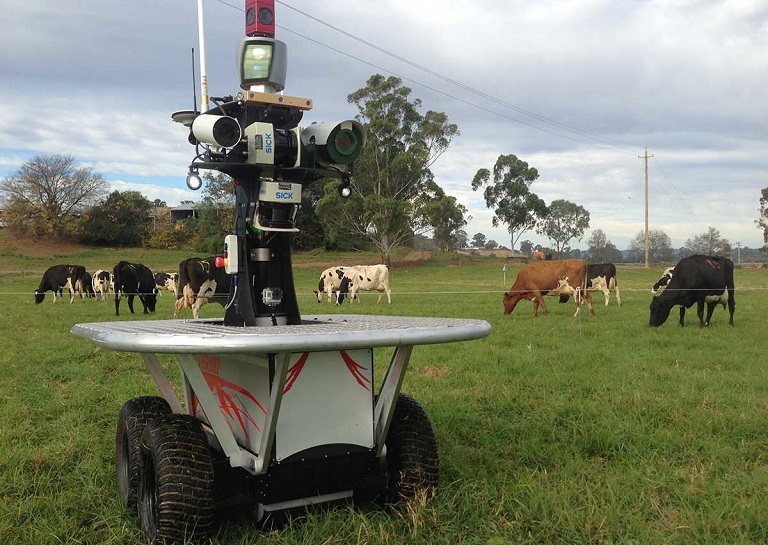 The extreme isolation of these massive farms leaves them often unattended and monitored infrequently- as little as only once or twice a year- meaning if the livestock falls ill or requires assistance, it can be a very long time for farmers to discover.

However, robots are coming to the rescue.

Robots are currently under a two-year trial in Wales which will train “farmbots” to monitor the health of livestock, herd, and make sure there is enough pasture for them to graze on. The robots are equipped with many sensors to identify conditions of the environment, cattle, and food using thermal and vision sensors that detect thermal changes in body temperature

“You’ve also got color, texture and shape sensors looking down at the ground to check pasture quality,”

Says Salah Sukkarieh of the University of Sydney, who will carry trials on several farms in central New South Wales.

During the trials, the robots algorithms and mechanics will be fine-tuned to make it better acclimated at ailing livestock and ensuring it can safely navigate around potential hazards including trees, mud, swamps, and hills.

“We want to improve the quality of animal health and make it easier for farmers to maintain large landscapes where animals roam free,”

The robots are not only limited to herding and monitoring livestock, other robots have been created to count individual fruit, inspect crops, and even pull weeds.

Many of the robots are equipped with high-tech sensors and complex learning algorithms to avoid injuring humans as they work side by side. The robots also learn the most efficient and safe passages by storing the data on internal and cloud-based storage, allowing engineers and farmers to analyze and better optimize the attributes and tasks of the robot, as well as provide a live stream giving real-time feedback on exactly what is happening on the farms.

Of course, some worry lies in outsourcing agricultural workers, however, it is farmers that are pushing for the advancements due to laboring vacancies ever increasing making it difficult to maintain large scale operations.

“It’s farmers who are driving this because labour is in short supply and they are looking for technological assistance,”

The robots have provided major benefits to farmers in various ways. From the robot Ladybird, capable of hunting and pulling weeds, to monitoring the condition of every fruit. The robots will be able to provide 24/7 monitoring on agriculture and livestock, as well as perform tasks more efficiently like spraying herbicides in reduced quantities compared to human counterparts. Future farms will likely experience a greater deal of autonomy as robots become cheaper to replace farmers out on the field, while being able to control more crops more efficiently, giving an interesting look into the future of farming.

SEE ALSO: Vertical Farming Revolution Is Coming To A Store Near You