The humble Rubik's cube just got a big upgrade by a University of Massachusetts grad student. The colorful toy is now suitable for the blind and visually impaired by its new tactile makeover.

The world's top-selling puzzle game just got a makeover. The Rubik's's Cube was invented in 1974 Hungarian sculptor and professor of architecture Ernő Rubik, but just got a new life thanks to a University of Massachusetts grad student. Kristen Sharpless was given an assignment as part of her Vision Rehab Therapy class to adapt a recreational game for someone who is blind.

In a flash of enlightenment, Sharpless immediately thought of the Rubik's's cube and went to work making it super tactile. To make the toy suitable for the visually impaired Sharpless made each colored side of the toy a different texture using craft supplies she could cheaply buy. One side features the rough side of velcro while another is covered in distinctly shaped buttons. Sharpless tested the toy on a blindfolded friend. After finishing the project she posted images of the toy on Reddit where it immediately made waves with lots of positive response. Sharpless described the outpouring saying, "I really liked about how much traction it got and the fact that I could spread awareness that adapting anything is possible if you think hard enough and that even the most uncreative person (myself!) can think of something that somebody else could find really helpful.”

Unexpected designer keen to continue to help the blind

Sharpless is keen to work in the health industry saying she chose the course to learn skills that would help people with disabilities lead independent lives. Describing the new cube Sharpless said, "I wanted to share something that was cheap and easy to make so people who work with the blind/have blind friends or family could replicate it if they wanted.”

Many Reddit users commented that they would attempt to make the toy for their own friends and relatives who suffer from visual impairment, so the toy is already fulfilling Sharpless' wishes. She said she has no plans to try and develop the toy for production. Which is just as well as there is actually already an official product that exists on the Rubik's website.

The original Rubik's's cube was actually called the Magic Cube and as of 2009 more than 350 million puzzles have been sold worldwide. While the puzzle reached its popularity zenith soon after its launch in the 1980’s, it continues to hold appeal with annual speed competitions still being held around the world. 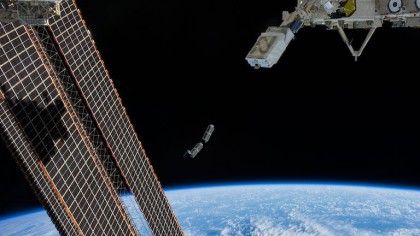 Rocket in a Rubik's Cube

There are many toys on the market for children (and adults) who have a visual impairment. But these children will also enjoy all toys but perhaps in a different way to non-visually impaired children. When you have reduced amounts of sight, texture, shape, and weight become much more important. When looking for toys that are going to provide an interesting experience for children with seeing difficulties, what it will feel like is very important. Adapting existing toys, just like the way Sharpless did to the Rubik's cube is a great way to make a toy more desirable for a visually impaired person. Adding texture or noise is a good place to start.

Could we engineer a vehicle with a nearly limitless power source?