Researchers at TsGI are developing a ground effect transportation vehicle to carry over 450-tonnes. 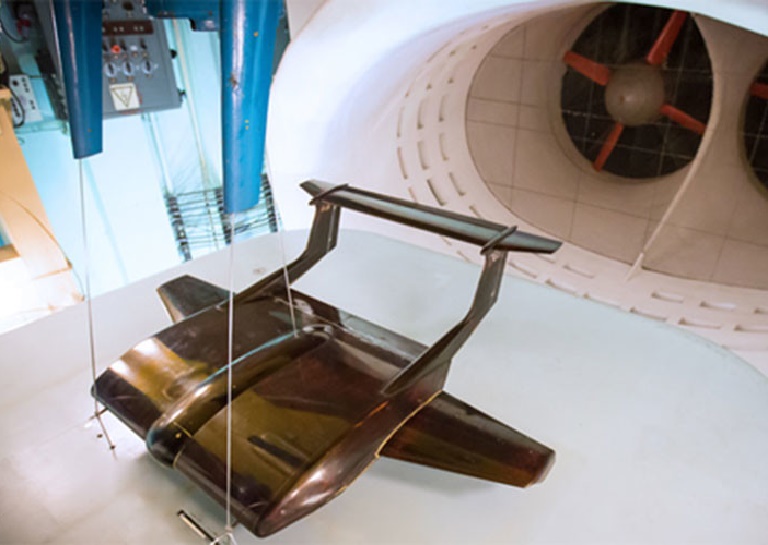 Most aircraft that take off do not lift straight into the air once their wheels come off the ground. Instead, for just a moment, they float just barely above the ground. The reason being is to make use of ground effect.

An aircraft flies by generating lift and directing airflow towards the ground. In open space (higher in the atmosphere) the high pressure from below the wing dissipates into the open air. However, as a plane flies nearer to the ground, the high pressure is directed into an incompressible solid, increasing the pressure and as a result, increasing lift. The vortices which come off of wingtips are also disrupted which leads to a further reduction of drag.

Pilots use ground effect right before takeoff to increase their speed before lifting off. Taking off as soon as the wheels are off the ground could result in the plane stalling. For pilots, the effect must be well understood as it is encountered during every landing and takeoff, usually quite noticeably.

Ground effect has been understood for many years. In fact, the Soviet military developed multiple GEVs (Ground Effect Vehicles) throughout the late 1900's, including the Lun, a massive 286-tonne behemoth.

The main purpose of the vehicle was to fly below enemy radar while being able to transport large cargo incredibly fast- at about 550 Km/h. While the Lun was almost undetectable at the time, researchers were more interested in its ability to be so fast yet carry an incredible load.

Specialists at the Central Aerohydrodynamic Institute (TsAGI) in Zhukovski are looking to ground effect to develop heavy transportation vehicles. The new GEV will be able to fly just 3-12 m above ice, water, or land. It will take advantage of ground effect to substantially increase aerodynamic efficiency. The vehicle will require less fuel and will be able to fly much further.

The vehicles entire hull will be integrated as part of the airfoil design to double as both a cargo hold and a wing. In a statement released by TsAGI, the vehicle will be able to hold dozens of regular sized shipping containers up to an incredible capacity if 450 tonnes.

“The proof-of concept work involved testing a scale model in one of TsAGI’s sub-supersonic wind tunnels. The tests involved cruise mode and take-off and landing mode,” the company states in their report. They also note “the experiment proved that the model has good aerodynamic performance.”

The current prototype being developed will be powered by four engines and will be fueled by natural gas. The company claims the vehicle will be more efficient than current transportation methods. Moreover, it will be able to transport goods faster and farther than ever before.

What still needs to be done

As with any preliminary design,  the vehicle will have to surpass all safety protocols before it will be approved to sail across the sea. The vehicle may seem to be incredibly dangerous to fly so close to the ground, but with ground effect increasing its lift dramatically, enabling it to stably glide across any relatively smooth surface.

Although, the engineers behind the vehicle are developing the plane to fly in two modes: cruise mode and landing and take-off mode. For landing and takeoff, the plane will be able to fly higher into the air for a short duration enabling the vehicle to land at regular coastal airports. In the event of large waves or obstacles, the mode will still be able to be activated to avoid the obstacle.

As of now, the vehicle is currently undergoing an early prototyping phase. However, the early tests results are proving promising. The fundamental principles of utilizing ground effect to boost efficiency are already well understood. Although, the largest hurdle will be proving the plane's ability to adapt to changing conditions.

Despite the dangers, the vehicle is intended to carry a crew of only nine. There is always an inherent risk during transportation, although the new GEV could prove to revolutionize the transportation industry.