The ISS could be getting two new high-powered robots working alongside human researchers.

The latest additions to the ISS might not be entirely human. According to Russia's Roscosmos space agency, two humanoid robots might be joining the ISS crew.

The robots called FEDOR -- short for Final Experimental Demonstration Object Research -- could be headed to space as early as next August. Just like their human counterparts, they'd be sent to the ISS via the Soyuz spacecraft.

Unlike other standard robots, one would think about being in close quarters aboard a spacecraft, the FEDOR robots have quite a reputation. Last year, Russian officials programmed the system to shoot guns from both of its hands. According to officials involved in the project, the additional training was to help the android improve its motor skills and decision-making.

The FEDOR is being further developed by Android Technics and the Advanced Research Fund. FEDOR also knows how to screw in light bulbs, drive a car, and use a variety of tools.

Several other outlets around the world, however, saw the FEDOR system as a real-life Terminator.

Shooting exercises is a method of teaching the robot to set priorities and make instant decisions. We are creating AI, not Terminator

The FEDOR robots aren't the first robots to hang out on the ISS. In 2015, NASA sent the humanoid robot Robonaut 2 to the International Space Station. The Robonaut 2 became the first dexterous robot sent into space. 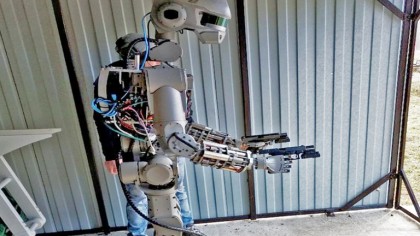 In June of this year, the SpaceX cargo delivered the AI robot named CIMON (or the Crew Interactive Mobile Companion). CIMON currently resides on the ISS in order to figure out how artificial intelligence could one day affect how people encounter space.

"NASA is counting on robots to setup and care for deep space exploration facilities and equipment pre-deployed ahead of astronauts," said Sasha Congiu Ellis, from NASA's Langley Research Center in 2016. "Robots are also excellent precursors for conducting science missions ahead of human exploration."

The ISS, in partnership with NASA, has been assessing the role robots can play in making the jobs of astronauts easier.