Russia has unveiled it's latest creation, and it isn't heartening, to say the least. Russia's state nuclear agency recently launched a new ice breaker, the Ural, and its mission is to smash its way through all that melting sea ice that has been locked up a treasure trove of natural resources and polar waterways for millions of years--giving us all a depressing preview of the international scramble for new territory the likes of which the world hasn't seen since the 18th century.

In a new report from Popular Mechanics, Russia's state nuclear authority, Rosatom, has been busy commissioning a fleet of absolutely massive, nuclear-powered icebreakers, the Arktika, the Sibir, and its newest vessel the Ural. The three ships are Project 22220 (P2X40) icebreakers, constructed by the St. Petersburg-based Baltic Shipyards, and is the largest class of ice breaker ever built.

RELATED: MASSIVE TANKER CROSSES ARCTIC WITHOUT AN ICEBREAKER FOR THE FIRST TIME EVER

At 568 feet long and 111 feet wide, the ships come equipped with two nuclear reactors, generating a combined 350MW of energy which is enough power for a P2X40 to break through ice nearly 10 feet thick. Two massive ballast tanks can be adjusted to alter the draft of the vessel considerably, allowing it to operate through shallows and deep ocean water equally well. Rosatom says that this effectively gives them two different classes of icebreaker in one ship, saving the agency hundreds of millions of dollars in the process.

The Arktika, the Sibir, and the Ural are expected to enter formal service in the rapidly thawing Arctic region in 2020, 2021, and 2022, respectively. The ships are part of Russia's broader strategy of taking advantage of the rapid loss of sea ice in the Arctic to position itself as the gatekeeper for the expected explosion of shipping routes through the rapidly expanding waterway on its northern border with the arctic ocean. Breaking up the ice that could inhibit this trade route expansion is the entire reason these ships exist, and the launching of the P2X40 icebreakers, as impressive as they are as machinery, effectively forecloses any hope of stemming the loss of polar ice in the Arctic.

The Scramble for the Arctic

The Arctic is going to melt; it's only a matter of how much at this point. With the global emissions we produce today locking in record high temperatures for the planet decades from now, there is a palpable sense of grief in the world as the realization starts to sink in that the climate crisis is actually happening. That the best we can hope to accomplish is to mitigate the worst effects if we can keep the global temperature rise under 2 degrees Celsius is even leading to a rise in mental health cases of climate-related anxiety and depression.

At this rate, we'll be lucky if we can keep it under 4 degrees, and honestly, there's nothing magical about 4 degrees as a ceiling; there's no real limit to how much hotter we can make the planet over the next 100 years.

So reports that the Russian's Rosatom is launching three brand new ice breakers to open up navigable waterways in the Arctic isn't the kind of news you want to hear when you're trying just to get people to stop making things worse, much less get them to fix the problem itself. Already, the sea ice in the Arctic has about as much chance of holding back the polar glaciers as a paper towel does a fire hose.

The situation for many appears like a foregone conclusion, but that's not how it works. You don't have climate change or don't have climate change. The power of the most massive bombs humanity has ever built is nothing compared to the energy unleashed by a typical hurricane, and as the temperatures rise, what constitutes typical is going to get exponentially more extreme.

So no, we probably can't stop the ice from melting long term, but we can try to stop it from melting tomorrow so that maybe the day after that, we'll have a better idea or technology that could mitigate our situation; we're playing for time, winning really isn't an option for us right now. Doing what we can to stabilize things is the only way to ensure that some later development has a chance to have an effect. The worst thing we could do is accelerate the collapse of the northern ice sheets with a short-sighted global power play in the Arctic, but that is exactly what is playing out right now.

The Russian Federation has not been discrete about its intentions regarding the Arctic. The control ofthe  Northern Sea Route (NSR) is a major strategic objective of the Russian government, by its own declaration, and it isn't hard to see why. As the sea ice melts, what it leaves behind is navigable waterways that human beings haven't seen in more than 100,000 years, if ever.

It would provide a drastically shorter route from Asia to Western Europe and North America, cutting weeks off the travel time of international supply chains. This alone would save hundreds of billions of dollars a year in fuel costs for global businesses, so these waterways will be used if they are available. And ever since humans took to riding and moving material down a waterway by boat, there's been someone who set up shop next to the waterway, claimed that they owned it, and made everyone that wanted to pass pay a fee to continue their journey.

The Russian government wants to be that guy, and they're doing everything they can to intimidate other countries out of the area who might stake a claim of their own.

According to a recent Financial Times report on the NSR, "Since 2013, Russia has spent billions of dollars on building or upgrading seven military bases on islands and peninsulas along the route, deploying advanced radar and missile defence systems — capable of hitting aircraft, missiles and ships — to sites where temperatures can fall below -50C. It gives Moscow almost complete coverage of the entire coastline and adjacent waters."

"The message is clear" the report reads. "If you want to sail through the Arctic and travel to and from Asia faster, or have designs on the oil and gas assets beneath the sea, you will be under Russian oversight."

As middle ground options to combat climate change retreat along with the glaciers, there is a growing chorus that argues that there is nothing we can do to stop climate change, so we might as well position ourselves--and by ourselves, they mean whichever industrialized nation-state we are a part of--to gain maximum advantage in the future.

This certainly appears to be the position of the Russian government. Sergei Lavrov, Russia's Foreign Minister, spoke to a assembly of Arctic region leaders and officials in April and told them that "the Americans think that only themselves can alter the music and make the rules. In terms of the NSR, this is our national transport artery. That is obvious...", adding that "[i]t is like traffic rules. If you go to another country and drive, you abide by their rules."

This is what is so distressing about the P2X40s and Russia's activities in the Arctic more broadly, such as their plans for extensive oil and natural gas exploration on newly accessible land that had been locked away underneath all of that melting ice. Just when we need to desperately abandon the kind of zero sum, expand-at-any-cost logic that has brought the world countless wars and other conflicts in our history, the leaders with the greatest power to alter the situation and force a reassessment of global political values are exactly the people who are doubling down on the very course of action guaranteed to make the worst impacts of climate change a certainty.

It'd Be Comforting if The US Had Just Gone Completely Mad, but What's Actually Happening is Much Worse

The concept of global warming was created by and for the Chinese in order to make U.S. manufacturing non-competitive.

Russia is hardly the only offender here. The current US administration is headed up by President Donald Trump, who has famously called climate change a Chinese hoax engineered out of thin air to harm American economic power, and a coterie of fossil fuel interests and foreign policy hawks recycled from the last major foreign policy disaster the US blundered into. If these various actors actually believed the arguments they put out in the media, or if they were actually going through an manic, psychological collapse brought on by having to confront the enormity of the climate crisis we face, they could be written off as either mind-numbingly stupid or delusional. Sadly, that isn't the case. Instead, it's something far, far worse. 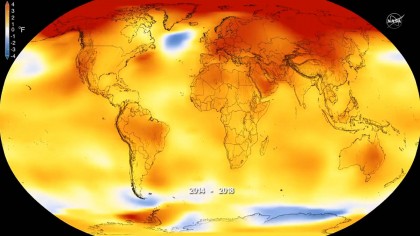 The US is currently trying to have it both ways, pretending on the one hand to "distrust" the science when talking to people at home on TV or at political rallies so no one has to ask or demand sacrifice from American voters and they can continue to enjoy the contributions of the fossil fuel industry to keep the party in Washington going. On the other hand, you have the US Secretary of State Mike Pompeo traveling earlier this month to the annual meeting of the Arctic Council, an organization of the eight nations that border the Arctic as well as representatives from indigenous peoples who call the Arctic home, and saying with a straight face that, actually, all this warming is pretty awesome if you want to get your hands on some good old fashion oil and gold.

"The Arctic is at the forefront of opportunity and abundance," Pompeo said. "It houses 13 percent of the world’s undiscovered oil, 30 percent of its undiscovered gas, an abundance of uranium, rare earth minerals, gold, diamonds, and millions of square miles of untapped resources, fisheries galore.

"Its centerpiece, the Arctic Ocean, is rapidly taking on new significance. Offshore resources, which are helping their respective coastal states on the subject of renewed competition. Steady reductions in sea ice are opening new passageways and new opportunities for trade. This could potentially slash the time it takes to travel between Asia and the West by as much as 20 days. Arctic sea lanes could become the 21st century Suez and Panama Canals."

Its not that US Government officials like Pompeo don't understand the threat that climate change represents. Not exactly a friend of the Earth in the best of times, the US military is arguably the most clear-eyed about the scale of the threat to not just US interests, but entire US cities and regions, that will be hit especially hard by climate change and they've been issuing reports about the national security implications for the US as a result of climate change for years.

They know full well what's at stake--they'll likely be the ones who have to do the fighting as the pressure put on nations around the world by climate change push more and more nations into conflict--, but the US, like Russia, is looking at the situation from the perspective of how they can best position themselves to weather the coming crisis rather than address it with some actual leadership. Watching the US and Russia prepare to scramble to claim territory in the Arctic while the rest of the world burns is painfully reminiscent of the final scene in Dr. Strangelove, as the US and Soviet ministers find new things to fight over in the rubble of a world being bombed into the stone age.