By using a 'neighborhood' of networks, the researchers created a new algorithm that can process Big Data at 50 percent faster speeds.

Rather than improve hardware capabilities to boost internet speeds, an international team of researchers used an algorithm to speed things up. 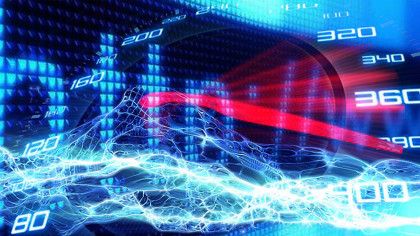 The computer scientists explained in a statement that the algorithm works based on a unique routing method. It allows for quick access to large, powerful data processing centers around the world. This gives computers needing faster speeds to solve "high-precision calculations" the additional internet support needed to solve the problem.

The algorithm comes from a joint study from Samara Oblast University in Russia and the University of Missouri in the US. With the increasing need for bigger data storage and faster calculations, the researchers think their algorithm could provide a bridge between current computing systems and the need for expensive, massive supercomputing systems.

"We offer the mechanism that can be in demand by the scientists who conduct experiments on the basis of the Large Hadron Collider at Cerne," said Andrey Sukhov. Sukhov was one of the authors of the article and he also serves as Professor of the Department of Supercomputers and General Informatics of Samara University.

How the algorithm speeds up computing

The authors explained that four requirements should be met in order for the algorithm to succeed at its peak performance. There has to be a particular bandwidth of the signal (which differs depending on the calculation's needs), speed of data transmission in Kbps, a cloud storage, and the "price of the [cloud] service."

The team explained that "the quality and speed of data transmission is achieved due to the superior constrained shortest path finder algorithm made by the scientists. Thus, the data transmission speed can be increased up to 50 percent."

The developers dubbed this algorithm "The Neighborhoods Method," where frameworks share loads and pathways across networks. The team explained that the algorithm functions the same regardless of what type of internet connection is used.

Helping researchers speed up their calculations

Sukhov explained this algorithm could be perfect for research facilities needing a variety of resources. In addition to the Cern, Sukhov mentioned the algorithm could be helpful to the International Thermonuclear Experimental Reactor currently being built at the CEA research center in France.

"[Researchers] calculate tasks in the laboratories scattered all over the world, make inquiries to the computer centers of the Cern," Sukhov continued. "They also need to exchange both textual information and high-resolution streaming video on-line. The technology that we offer will help them with this."

The computer scientists from Samara University also plan on using the algorithm for their own projects. Other engineering departments have already approached them about the algorithm, wanting to use it to calculate data regarding combustion reactions.

The data the combustion team needs is only found in three research facilities around the world. The algorithm would help connect those data banks, and thus, the research teams.

The full report can be found in the IEEE Transactions on Network and Service Management journal.

Failed Russian Satellite Falls to Earth Over the US Skies