Kalashnikov, the Russian arms maker, showcased this week their CV-1 electric car concept which will reportedly have a range of 217 miles on a single charge.

Almost all of us are familiar with AK-47, one of the most successful assault rifles in human history. Kalashnikov, the Russian manufacturer behind the development of this lethal weapon, however, plans to diversify its presence beyond manufacturing guns.

The company unveiled an electric car concept called CV-1 at the Russian Defense Ministry’s annual exhibition this week. The design of this retro-style prototype was inspired from the Soviet hatchback IZh 2125 "Kombi" which was manufactured during the 70s.

The pale blue, boxy design of the car might not attract many of us, but the company is looking to compete with Tesla by offering 217 miles of range on a single charge. The concept car according to the company's website can reach 62 miles an hour in six seconds.

The electric car is still a concept and as such no information on the pricing or launch date was disclosed. However, the prototype will include features such as a high-speed battery modular control system and a “revolutionary” compact inverter, the company said.

The arms maker has been trying since long to expand its brand by launching clothing lines, merchandise for civilians and even futuristic robot concepts. The firm just this week unveiled a 4.5-tonne bulletproof robot that can walk and hold weapons.

However, the attempt to come up with an electric car concept like this attracted mixed reactions from the Russians. The company’s Facebook page was filled with comments on the news, much of it not too encouraging. Twitter too had a fair share of users unleashing a wave of sarcasm about the electric concept car.

#Russia’s Kalashnikov manufacturing firm presented a prototype of a Russian electric car aimed to compete with those produced by @Tesla. Yes, this is 2018: https://t.co/KnWJeeVkYP pic.twitter.com/Hsu0yMV9YN

Hey, @elonmusk , what you think about electric car CV-1 by Kalashnikov (these guys behind AK-47 gun)? They call it Russian competitor to Tesla ? pic.twitter.com/pJ6EXg6SJu

Not all of it was bad of course. While some of the users mocked the retro design, many appreciated the concept for reviving their old and pleasant childhood memories. 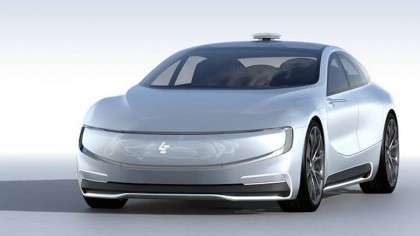 The Russian arms maker also took the opportunity at the expo to showcase a hybrid buggy and an electric motorcycle. According to TechCrunch, this hybrid buggy can manage to attain speeds of up to 100 kilometers per hour and is fitted with separate electric engines in the front and rear wheels.

Not bad for early efforts! Time will tell how this rival from the East will compete with Tesla.

Tesla Furloughs Half Its US Delivery, Sales Employees Amid COVID-19