The world’s first floating nuclear power plant set on its first voyage on Saturday. The Russian Akademik Lomonosov has media, environmental groups and other countries worried.

This Saturday, the world’s first floating nuclear power plant, Russia’s 70-megawatt Akademik Lomonosov, began its first trip from St. Petersburg, announced Greenpeace in an alarming statement. The ship, launched to provide energy to geographically challenging coastlines such as Russia’s sub-Arctic regions, started heading towards Murmansk, a city located at the end of a deep bay off the Barents Sea.

A mission already once derailed

The floating nuclear power plant has a long route ahead, according to a release issued by state-controlled nuclear giant and builder of the Akademik Lomonosov Rosatom. The ship is scheduled to be towed around Norway, fuelled in Murmansk in 2019 and then sailed to the Arctic to power the town of Pevek, a desalination plant and drilling rigs.

The news has worried Greenpeace, several other countries and the media who have dubbed the ship the “nuclear Titanic” and its mission “Chernobyl on ice.” Noise surrounding Akademik Lomonosov's activities has already seen the ship derailed once.

The floating plant was initially supposed to be loaded with nuclear fuel and tested on St. Petersburg’s shipyard site, in water shared with Estonia, Finland, Latvia, Lithuania and Sweden. A petition organized by Greenpeace Russia and backed by pressure from the Baltic states saw the mission moved to Murmansk.

“To test a nuclear reactor in a densely populated area like the centre of St. Petersburg is irresponsible to say the least,” said Jan Haverkamp, nuclear expert for Greenpeace Central and Eastern Europe. However, the move did not alleviate the environmental group’s concerns.

“Moving the testing of this ‘nuclear Titanic’ away from the public eye will not make it less so: Nuclear reactors bobbing around the Arctic Ocean will pose a shockingly obvious threat to a fragile environment which is already under enormous pressure from climate change,” Haverkamp added.

The ship contains twin nuclear reactors with enough power to feed a city of about 100,000 people and is intended mainly to provide power for oil and gas exploration, a polluting and potential catastrophic endeavor. According to Russian media sources, Rosatom is planning on mass producing its floating nuclear plants for potential markets in Africa, Latin America and South East Asia. 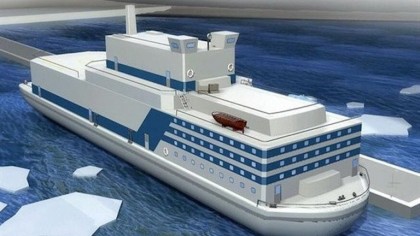 Needless to say, this has troubled Greenpeace. “This hazardous venture is not just a threat to the Arctic, but, potentially, to other densely populated or vulnerable natural regions too,” said Haverkamp.

Russia, China and the United States have all been competing for control over the Arctic in what some have been referring to as the new cold war. Russia hosts more than half of the Arctic’s coastline along its northern shores and is said to be seeking access to the region’s suspected potential $35 trillion worth of oil and natural gas.