The Chicago native is being hailed as the next Albert Einstein or Stephen Hawking thanks to a long list of accomplishments at just 23 years old. She's taken the physics world by storm with her innovative studies and engaging YouTube channel.

At 23, most young professionals just graduated college and are looking toward the workforce or, if they're an academic, toward graduate school. Life morphs into a quasi-adulthood filled with confusion and regularly dealing with real-world issues.

And then there's Sabrina Pasterski.

Sabrina Gonzalez Pasterski hailing from Chicago, Illinois is being seen as the next Einstein or Stephen Hawking thanks to her high accomplishments at the young age of 23.

She started her education at Edison Regional Gifted Center in 1998. At that time, Sabrina's peers recognized her genius  In 2010, she graduated from Illinois Mathematics and Science Academy.

This American physicist was already one of the most well-known physicists in the US and a graduate of Massachusetts Institute of Technology or MIT, class of 2010, where she earned a 5.0 GPA, the highest GPA one can receive. This was recognized by MIT physics department as she received Orloff Scholarship Award in 2013. Recently she’s active in a Ph.D. program at Harvard University.

One hallmark of her many achievements so far might be the fact that she built an entire fixed-wing single engine plane at the age of 13-years-old. Called the N5886Q, she started building the aircraft in her father’s garage in March of 2006 at the age of 12. She completed her work in October of 2007.

"At 10, I had bought an engine rebuild stand, cheap eBay red tagged (damaged) crankcase/crankshaft/cylinders/pistons/etc to repeatedly practice building and tearing down an O-200A engine in the foyer outside my bedroom," she writes on her website.

Though not active on social media or any of the usual millennial tropes, she does have a YouTube channel called PhysicsGirl, where she shares the process of building the aircraft titled; "Sabrina 2006: Building an Airplane for My Dad" in 2008. The video has almost 600,000 views so far. Notably, she can also fly her creation as she received her pilot’s license in 2003.

“It was then disassembled, painted, and transported to KARR. It was certified as an airworthy E-LSA on January 11, 2008, and flew its maiden flight four days later, on January 15th. It was kept in Phase I flight testing for my first U.S. solo which I conducted in it on August 24th of 2009 at age 16,” she writes on her website, which is no-frills and to the point, much like the girl herself.

Aside from dabbling in aeronautical engineering, her main focus is exploring the world of physics, with focus on space. Specifically, the sort of complex and seemingly impossible queries approached by great people like Hawking and Einstein at a similarly young age. In fact, a paper released early last year by Stephen W. Hawking, Malcolm J. Perry and Andrew Strominger, cites two papers co-written by Sabrina Pasterski and another she wrote on her own in 2015.

She also works on various social projects and initiatives, one of them being "Let Girls Learn". This landed her an invitation to White House in 2016 and she even got a congratulatory message.

When she eventually does graduate and leave academia, she has more than enough prospects waiting for her. Jeff Bezos, the brains behind Amazon (you might have heard of it) has already said that she has a job at his aerospace company Blue Origin when she’s ready and able. That is something she's aimed to do since she was a child; in fact, she named Bezos as her inspiration and the main reason why she got into physics in the first place.

Her research looks at black holes, the nature of gravity and space-time. However, she mainly works on understanding “quantum gravity” which aims to explain the phenomenon of gravity within the context of quantum mechanics. If she can crack that, it would greatly change humanity’s understanding of the universe. All her scientific accomplishments are the reason why Forbes ran a story about her and NASA offered her a job. Hertz Foundation Fellowship and Lindau Nobel Laureate Meetings Young Researcher are just some of the awards and honors she received during her young career.

"Years of pushing the bounds of what I could achieve led me to physics," she told Yahoo News. "Physics itself is exciting enough. It's not like a 9-to-5 thing. When you're tired you sleep, and when you're not, you do physics." This mentality is exemplified through all aspects of her behavior. For example, she once told Yahoo that, unlike other kids, she never had a boyfriend, tried alcohol or smokes while growing up. This only shows her full commitment to science. 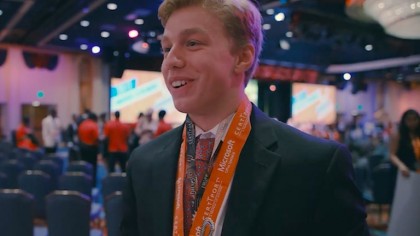 Despite the physics world seemingly being her oyster, the young woman still tries to search for new challenges.

"I’ll hopefully be right about having some kind of gut feeling that [will become] rather big at some point. Fingers crossed," she told the Chicago Tribune.

Don't be surprised if you see Sabrina on the cover of magazines and TV news in near future. She is definitely a person who can change the face of science.

What do you think of Sabrina Gonzalez Pasterski? Do you follow her work?