With the launch of the Apple X iPhone you can expect to see a glut of old Apple models popping up on for sale sites as Apple fans ditch their outdated technology in favor of the new. It’s a consumer trend we have seen since the rise of the flagship devices from both Apple and Samsung. But if you can’t sell your phone then you may as well keep it as a backup - just in case. But what if you could turn the operating system power from your old phone into a different sort of cash - bitcoin ‘cash'?

That was the motivation for an engineering team from Samsung called the C-Lab, who have created a bitcoin mining rig from old Galaxy s5s. The C-Lab team is tasked with finding creative ways to use old technology, a process known as “upscaling” or repurposing. And they really fulfilled the brief with this unexpected mining rig that they presented at the Samsung’s developer conference in San Francisco. The team used 40 old Samsung’s Galaxy S5’s to build the tower of power that will allow them to mine bitcoin. 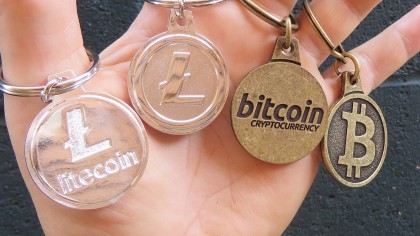 Bitcoin mining is essential to the running of the cryptocurrency bitcoin. It keeps the network safe and secure as well as making sure that all transactions are being completed fairly. Basically, anyone can be a bitcoin miner, with the right equipment and knowledge. Normally that equipment is a high CPU computer, but these Samsung engineers have just proved all you need is a little imagination.

The rig wasn’t the only repurposed invention presented at the conference, they also created really cool inventions like an old Galaxy tablet turned into an Ubuntu-powered laptop, and a used Galaxy S3 that is now functioning as a fish tank monitor. Samsung spokesman, Robin Schulz, told online media “This innovative platform provides an environmentally responsible way for old Galaxy mobile devices to breathe new life, providing new possibilities and potential extended value for devices that might otherwise be forgotten in desk drawers or discarded.”

If you had thought about testing out bitcoin mining, perhaps the Samsung method is the way to go. While the equipment needed to mine isn’t always expensive, the power required to maintain it often is. Samsung have promised to release the software they used to hack their devices as well as the plans and designs for the showcased inventions.

Samsung’s investment in the C-lab puts them in good stead with environmentalists who have blasted the smartphone industry in the past for creating products that are too hard to fix or that are just not built to last. Apple is seen as among the worst offenders of this. The 2012 Apple MacBook Pro with Retina Display has been named one of the hardest-to-repair laptops ever made. Mark Schaffer, who runs an environmental consultancy, described the computer saying, “Historically, the MacBook Pro line had been modular, repairable, and upgradeable. The 2012 Retina MacBook Pro, however, shipped with a proprietary SSD, non-upgradeable RAM, and a glued-down lithium-ion battery.” It is these types of intention design features that are causing huge amounts of e-waste as consumers just can’t fix devices that wear out or are damaged. We are curious to see if any other big brands follow the upcycling trend started by Samsung.

Via: Futurism, The Verge, Motherboard