Samsung Electronics has started producing chips called application-specific integrated circuits (ASICs) last month, according to local media. The company is making the chips for an unidentified Chinese mining company to mine cryptocurrencies.

A Samsung Electronics spokesperson said, “We are in the middle of a foundry business that is being supplied to a virtual money mining company in China.”

The company said in an earnings call on Wednesday that it expects producing ASICS will help boost earnings this year. Samsung claimed it would "benefit from cryptocurrency demand increase" in the semiconductor arm.

Mining is a process, requiring special hardware and chipsets, in which supercomputers solve complicated mathematical problems to validate a transaction on the bitcoin network. 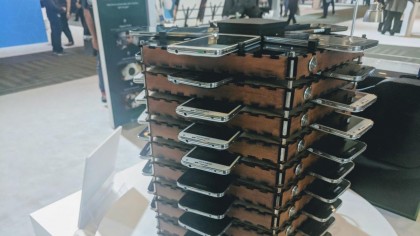 ASICs are designed to carry out a single task – mining bitcoin or another cryptocurrency, but not general computing operations. Until 2013, they were more commonly associated with the TV industry.

This year, processors, which are designed for bitcoin mining, were put on the market. They promise better performance and lower energy use than GPU (graphics processing unit) chips, which are still more commonly associated with the task. GPUs are used to handle graphics on computers as well as being deployed for mining purposes.

Samsung’s existing chip products, which consist of high-capacity memory chips for GPUs, reportedly accounted for more than 60 percent of its 2017 operating revenue. The company will expand on the current chip products with its shift towards manufacturing processors for the crypto mining industry, Samsung said.

The company is said to have completed the process for the development of ASICs for bitcoin mining last year. Samsung's semiconductor division has already helped increase profits and boost shares, the company said.

Samsung has a division within its semiconductor business called Foundry, building chipsets for other companies. Samsung said it expects its Foundry arm to be "number two" in the business.

The ASICS market is dominated by China’s Bitmain and Canaan Creative, both of which work with Taiwanese giant TSMC.

Samsung could have automatic advantage

The size of Samsung's semiconductor plant could give the firm an automatic advantage, according to analysts.

The company's involvement in mining can lead up to serious competition for the existing industry leaders.

The market for ASIC miners has already been booming, and there was a big price rally in 2017.

The sharp rise in the prices of bitcoin and other cryptocurrencies over the past year has boosted interest in their mining. At the time of writing, Bitcoin trades near $9,300.

Samsung may well capitalize on growing demand for them, having just passed Intel to become the world's largest chipmaker by revenue. Even though cryptocurrency mining chips are a growing market, they may remain a relatively small revenue stream for Samsung for now, according to analysts.

The huge energy demands from bitcoin mining, much of which is located in China, has also led to concerns about its environmental impact.

Samsung Made a Hardcore Galaxy S20 Tactical Edition Just for the U.S. Military

People Are Building Cardboard Tanks for Their Cat Friends Amid Quarantine

17 Ingeniously Repurposed Contraptions Show Nothing Needs to Go to Waste