Samsung is showing off a massive 146-inch display at this year's CES. The massive MicroLED TV is expected to hit stores later this year.

Samsung has unveiled a 146-inch 4K TV called The Wall at the annual Consumer Electronics Show (CES) in Las Vegas. The massive panel is reportedly designed using a modular system of smaller panels grouped together. This same design feature means the TV display can be smaller if desired. The Korean company describes The Wall as “the world’s first consumer modular MicroLED 146-inch TV.”

The Wall was unveiled at the annual First Look event at CES, where influencers and journalists are given a sneak peek into the big announcements of the week-long event. Jonghee Han, President of Visual Display Business at Samsung Electronics spoke to the gathered crowd: “At Samsung, we are dedicated to providing consumers with a wide range of cutting-edge screen experiences. As the world’s first consumer modular MicroLED television, ‘The Wall’ represents another breakthrough. It can transform into any size, and delivers incredible brightness, color gamut, color volume and black levels. We’re excited about this next step along our roadmap to the future of screen technology, and the remarkable viewing experience it offers to consumers.”

The huge 146-inch model on display at CES is 4K but the use of MicroLED technology means that each display can adapt to different size, resolution or form. The tiny micrometer (µm) scale LEDs used in the display serve as their own source of light which means they don’t require a backlight. Thus deep blacks and high contrast can be achieved in a form much slimmer than traditional LCD screens. 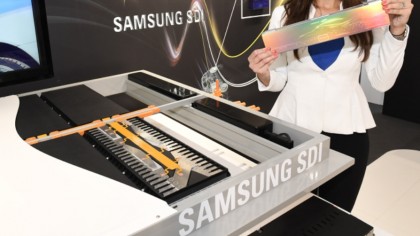 MicroLED displays make up its image using an inorganic Gallium Nitride (or GaN) material and an array of millions of these very tiny LEDs. The Wall claims it produces 2,000 nits of brightness. MicroLED display technology, while still an emerging field, is said to have a longer lifetime than its closest competitor, OLED. Previously, the industry had experienced problems in producing the technology at large screen sizes, but Samsung seems to have broken through. They said they chose to highlight the impossibly big display at CES in order to “highlight the capabilities inherent in MicroLED technology.”

Samsung confirms 'The Wall' will go to market

CES is always home to a range of weird and almost unbelievable new TV’s and displays but unlike many other offerings at CES, Samsung seems serious about bringing this idea to market.

According to online media, Samsung has confirmed that The Wall will hit the market this year “in a range of different sizes”. The Wall will be most likely priced way too high for any regular consumer to enjoy but Samsung's dedication to developing the microLED technology to this scale is a huge achievement and will likely pave the way for other uses of this emerging technology. Apart from The Wall, Samsung showed off a QLED 8K TV that it says uses “8K AI technology” to upgrade content to the ultra-high resolution. It also promised its virtual assistant Bixby will be embedded in more standard 2018 smart TVs. The Consumer Electronics Show runs from 9 to 12 January in Las Vegas.

7 functional massage guns to annihilate any kind of body ache