Waters off the coast of San Diego are showcasing an interesting biological phenomenon thanks to a red tide of dinoflagellates.

There's an interesting bright blue and teal glow on the horizon of San Diego's oceans, but it's not caused by anything blue. A red tide has sparked a recent bioluminescent display, according to Scripps Institution of Oceanography.

Scripps researcher Michael Latz said the glow is very unique but more common than most would expect.

Latz added that, "We can’t predict when these things occur, we don’t know how long they will last, when they’ll be here, and we really don’t understand the dynamics."

What exactly causes the red bloom that often make headlines around the world?

"The coloration of the water is due to massive numbers of organisms, including the red tide dinoflagellate Lingulodinium polyedra. Each cell contains a little bit of sunscreen that gives it color. On sunny days the organisms swim toward the surface, where they concentrate resulting in the intensified coloration."

As for the red tide 'turning' blue, that's a very different type of natural interaction among the algae, according to Scripps Institute researchers.

"The algae makes a light when a fish or little shrimp tries to eat it," said Dimitri Deheyn, a research scientist with the Scripps Institution of Oceanography. "That light attracts a bigger fish that can eat whatever is trying to eat the algae." 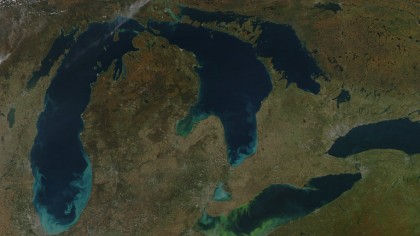 The safety comes at a cost, however. In order for the phenomenon to start, one algae has to light up and sacrifice itself in order for the rest of the bloom to survive.

According to the Scripps researchers, these dinoflagellates in this red tide don't make toxic compounds. While there are still some people with a sensitivity to red tides, most people are fine to swim around in the algae.

"Here in California these blooms of dinoflagellates are usually not toxic," said Deheyn. "So feel free to go swimming in the bioluminescence, it's an awesome experience. Or you can take the algae and smear it around the sand to watch it glow."

The best time to experience the red tide, said biological oceanographer Peter Franks, is during the day between 11 a.m. and 1 p.m. During this time, the algae swim upward in order to get more light. This creates a visible layer toward the surface, and that swimming often coincides with the waves onshore.

The best time to capture that bioluminescent glow, however, is definitely at night. Ideally, try to be near the waters two hours after sunset in a place with no light pollution, according to Deheyn.

The Scripps researchers also said they don't know how long this bioluminescence and red tide will last, so they're encouraging anyone in the San Diego area to go to the beach sooner rather than later in order to catch a glimpse of the unique biological light show.

Via: Scripps Institution of Oceanography