Saturn's Rings Are Disappearing According to NASA

NASA scientists say that the rings will only be around for another 300 million years which is so brief in the timescale of the universe.

Saturn's rings are disappearing. According to a new video from NASA Goddard, the rings are actually a ‘new’ feature of the planet, estimated to be less than 100 million years old and they won’t last long.

Saturn’s iconic rings are made up of mostly frozen water which is actually getting pushed onto the planet's surface. The rings are depositing so much ice on to the planet that they will essentially destroy themselves.

"We estimate that this ‘ring rain’ drains an amount of water products that could fill an Olympic-sized swimming pool from Saturn’s rings in half an hour,” said James O’Donoghue of NASA’s Goddard Space Flight Center in Greenbelt, Maryland.

“From this alone, the entire ring system will be gone in 300 million years, but add to this the Cassini-spacecraft measured ring-material detected falling into Saturn’s equator, and the rings have less than 100 million years to live. This is relatively short, compared to Saturn’s age of over 4 billion years.”

O’Donoghue is the lead author of a study on Saturn’s ring rain appearing in the journal  Icarus. The discs material is forced onto the planet through a combination of being blasted by radiation from the Sun in addition to clouds of plasma from impacts of space rocks.

Discovery raises questions about former rings on other planets

This causes the ice from the rings to be picked up by the planet’s magnetic field and then pulled down towards the planet by gravity. But don’t panic yet, NASA estimates that there is enough material in the rings for them to last another 300 million years or so.

This is a long timeline but it also serves to remind us that everything in our solar system is continually changing.

Scientists have long wondered if Saturn was formed with its rings or if they developed later, this new study indicates it likely that they occurred sometime after the planet was formed, and that the planet will continue to exist without them.

“We are lucky to be around to see Saturn’s ring system, which appears to be in the middle of its lifetime. However, if rings are temporary, perhaps we just missed out on seeing giant ring systems of Jupiter, Uranus and Neptune, which have only thin ringlets today!” O’Donoghue added.

NASA will continue to examine Saturn

Saturn has been observed by a team at NASA who have been using the Keck Observatory near the summit of Mauna Kea in the U.S. state of Hawaii. The researchers also made the surprising discovery of a glowing band at a higher latitude in the planets southern hemisphere. 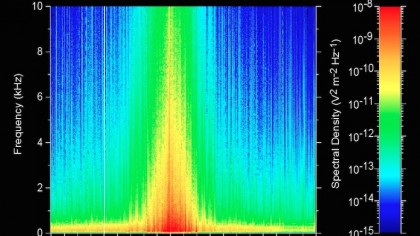 NASA says the band is ‘located where Saturn’s magnetic field intersects the orbit of Enceladus, a geologically active moon that is shooting geysers of water ice into space, indicating that some of those particles are raining on Saturn as well.’

“We identified Enceladus and the E-ring as a copious source of water as well, based on another narrow dark band in that old Voyager image.”

The researchers will now focus on observing the changes of Saturn's rings during its long seasons. Saturn takes 29.4-years to complete an orbit and experiencing various level of sun's radiation during that turn.