Called NEOM, the city will be 33 times bigger than the Big Apple and could become one of the largest cities on earth to run only on renewables.

In a time when oil prices are falling, a country like oil-driven Saudi Arabia is bound to struggle. Lately, the Kingdom has seen a GDP plunge that has made it difficult to pay its oil workers.

However, the Saudi Arabian government has a plan to boost its failing economy -- a $500 billion mega-city called NEOM that will connect Jordan and Egypt to the Kingdom. Better yet, they plan on powering the entire city infrastructure with renewable energy.

“NEOM is situated on one of the world’s most prominent economic arteries ... Its strategic location will also facilitate the zone’s rapid emergence as a global hub that connects Asia, Europe, and Africa,” the Public Investment Fund (PIF) said to Reuters.

Saudi Crown Prince Mohammed bin Salman announced the plans this week in Riyadh at the Future Investment Initiative conference. The venture is being funded by both the Saudi government and private investors.

Part of the Saudi funding will come from selling 5% of oil behemoth Saudi Aramco, which should provide $300 billion for construction costs. It will also allow foreign investors to own more than 10 percent of listed Saudi companies.

"This place is not for conventional people or conventional companies, this will be a place for the dreamers for the world," bin Salman said on a panel at the conference. "The strong political will and the desire of a nation. All the success factors are there to create something big in Saudi Arabia."

The city will span 10,230 square miles (26,500 square km), which is more than 33 times the land area of New York City. NEOM’s ultimate goal is to reduce Saudi Arabia’s reliance on fossil fuel exports, in the hopes that this move will expand the Kingdom’s economy beyond its dependence on oil.

NEOM will have within it an array of industries including energy and water, biotechnology, food, advanced manufacturing, and entertainment. The government has yet to release an official mockup of what the city will look like.

So far, Saudi has hired Klaus Kleinfeld, a former chief executive of Siemens AG and Aloca Inc, to head up the project. 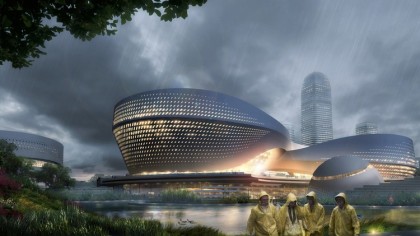 Upon completion, NEOM could become one of the largest cities on the planet to function without the use of fossil fuels. Right now, a city doing just that is Burlington, Vermont but its size is nothing compared to the eventual breadth of NEOM.

Additionally, parts of Scandinavia are also claiming to be almost 100% renewable electric grids using hydropower and geothermal heat. Saudi is hoping to be ahead of the game with this gamble.

“This is a double-edged sword. If they (young Saudis) work and go the right way, with all their force they will create another country, something completely different ... and if they go the wrong direction it will be the destruction of this country,” Prince Mohammed said with regards to the future of the super city.

NEOM’s first phase should be complete by 2025.