The fundamentals of brewing beer are explained, scientifically!

Whether you like enjoying a beer on a hot weekend afternoon or hate the taste of the alcoholic drink, there's a ton of science that goes into creating it.

Science may be the last thing on your mind while enjoying a cold one, but it's always good to know just how what you're enjoying was made.

Science contributes to the type of beer, the different flavors, and how it is alcoholic – so let's learn the science behind brewing!

The main ingredients of any beer are water, malted grains, hops, and yeast. Hops are the flowers of the hop plant which are used for flavoring. The only other uses for hops are in herbal medicine.

With these 4 ingredients, you have everything you will need to make beer, but the combinations and processes make all the difference.

All of these ingredients are boiled together for set amounts of time until the final mixture is filtered and sent to fermentation.

Mineral contents in your source water can make a huge difference to the type of beer that you brew.

Calcium and magnesium in your water otherwise referred to as hardness, affect how the yeast grows and metabolize the sugars in your brew.

Bicarbonate (HCO3-) in your water also affects the pH of the beer during the fermentation process.

Brewing is essential for the taste

If you are wanting to brew a beer that is more caramelly or toasty, then you will need to roast your grains more than usual.

Hops are the main driver behind modern beer and without them, our pints would be a little less enjoyable.

The hops act as a surfactant that allows bubbles to be trapped in the head of a beer.

If hops aren't added to the beer, it would have much less surface tension resulting in no head and a bitter taste.

Hops can provide certain flavor notes to the beer, but their main effect is stabilizing the brew to allow our pallet to taste all of the different bitter and sweet notes of a beer.

Without hops, we would have a hard time tasting the flavors and ultimately enjoying beer.

Yeast is the next big player in beer and is the most important element to making it alcoholic and carbonated.

These little cells seek out the glucose molecules in beer left by the grains and hops.

By fermentation, the yeast converts the glucose into ethanol (alcohol) and CO2 (carbonation). The specific chemical equation is as follows:

This is the general equation of fermentation, but specific products can be influenced by the type of yeast used in brewing.

Ale yeasts are top fermenting, which means they can ferment at higher temperatures and ultimately produce more esters, which are organic compounds easily described as fats and oils. 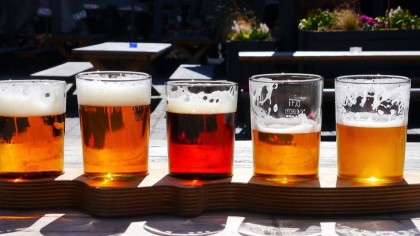 Lager yeasts are bottom fermenting, which means that they ferment at lower temperatures, producing a crisper taste.

Wild yeasts are seldom used in the brewing process, but when they are, they produce a mixture of compounds that were more acidic and an acquired taste.

These are rarely used because the exact flavor profile is harder to control from a brewing perspective.

During the fermentation process, certain molecules can have different effects on the final flavor and feel of a beer.

The length of carbon chains in alcohols, the amount of alcohol, type of esters, residual sulfurs and carbonation levels all contribute to the final flavor profile.

Factors that can influence fermentation and alcohol content are mineral content, temperature, pitch rate of yeast, aeration, and length of the fermentation process.

Brewers closely control all of these variables to get the flavors that they want out of a final brew. Esters produced in the fermentation process can be predicted and controlled to produce certain flavors as well.

Ethyl acetate is the most common ester in beer and smells of nail polish remover.

In order to smell this ester, a high content needs to be present in a beer and this usually isn't the case.

Isoamyl acetate is another ester that smells of bananas. This ester is found in many Belgian and wheat beers.

Ethyl butyrate gives a hint of passion fruit or pineapple to the beer bringing up the sweeter notes.

Finally, Ethyl hexanoate results in an apple-like flavor added to a brew.

Digging into some of the most popular beers, we can see just how precise every aspect of the brewing process is controlled and how it is made.

Budweiser is considered a Pilsner malt, meaning a lighter golden beer with a sweet hint, with a medium amount of hops. They use a type of yeast named S. ovarum and ferment their brew at 15˚C for 2 weeks and add wood chips during the fermentation process to help the yeast grow. Finally, the beer is heavily filtered and force carbonated.

Guinness, a darker beer, has dark roasted malted grains that give the color and light roasted malts that provide sugar for fermentation. They use a yeast named S. cerevisiae and ferment at 18˚C for 2 or 3 weeks. The beer is then filtered and carbonated with nitrogen which results in the creamy taste due to nitrogen creating smaller carbonation bubbles.

Finally, Rodenbach has lighter roasted malts and wheat with low to medium hops. They use wild yeast along with spontaneous mixed cultures to ferment at 18˚C for 2-3 weeks. The beer is then filtered and fermentation continues in the bottle to add natural carbonation.

After all of this is done, the brew is complete. There's really no reason to store beer for long periods of time like other alcohols because the flavor profile is already completed at the time of brewing. In fact, most beers will have an expiration date of within a year, even shorter if natural carbonation is used.

Sources: Inside Science, How Stuff Works