Star Wars films offer fans breathtaking cinematic experiences. Enormous capital ships vying for supremacy in the deep darkness of space, lightsabers and of course the enigmatic "Force" make for a highly immersive experience. But what about the technology supposedly employed by these behemoths of the stars? Let's have a quick look at the science of Star Wars.

Clearly, in-depth analysis of the technology is far beyond the remit of this short article, but we hope this gives you a nice introduction if you're not yet familiar with the "lore".

As it is standard issue for any self-respecting capital ship in sci-fi, shields are an integral technology in the Star Wars Universe. In most cases, Star Wars ships are able to project a protective shield around the ship without the need for line of sight. In Star Wars canon these shields tend to be of two types, particle and ray shielding.

Is the technology feasible? Let's have a look.

Interestingly a recent scientific study has shown that they may be possible in the not too distant future. Taking inspiration from the Earth's ionosphere it might be possible to produce a form of reflective shielding in reality. The downside might be that it would be difficult to "see" outside or fire energy weapons through it. The paper released in the Journal of Special Physics Topics showed that with a sufficiently powerful magnet, similar to those used in MRI scans, could sustain a plasma shield that could block laser fire.

This tech would need a magnetic field of around 5 tesla. MRI scanners use around 3 tesla, with 60-tesla magnets used in research. The paper does acknowledge that a large power source would be needed to sustain the shield. On the gigantic capital ships in Star Wars, this is not a deal breaker, but on smaller fighter craft it could potentially be restrictive. The plasma temperature would need to be around 750 degrees Celsius.

It is suggested that the lack of visibility could be overcome with the help of UV cameras. This would allow the crew to see beyond the shield by using frequencies outside the range of the shield itself. As for returning fire, it could be possible to time the shield to "drop" and "raise" in sync with the firing of the ship's weapons, similar to WW2 nose mounted cannons on German fighters.

The ability to perform "faster than light" travel is another staple of sci-fi. In Star Wars, this tech is given the name "hyperdrive". According to the Star Wars canon, this is performed by sending "hypermatter" particles to hurl the vessel into "hyperspace", while preserving the ship's mass/energy profile. This tech requires the vessel to travel along a plotted course and translate between normal space and "hyperspace".

As Einstein tells us traveling faster than light is not possible as mass and energy are directly related. As you approach the speed of light, your mass will increase accordingly. A possible solution to the mass, energy and gas-missile issues might be to take space "with" you rather than try to "smash" through it.

Gerard Cleaver, Professor of Physics at Baylor University does hint at a possibility to overcome this. General relativity states that objects cannot travel faster than light as measured in local surrounding space. Cleaver states that the theory "places no limits on the speeds at which space itself expands or contracts". This could be a loophole that we could exploit to get around general relativity constants. This technology would mean that the ship would contract space-time in front of it and re-expand it behind. A bit like the wake of a ship, but with the fabric of space rather than fluids.

Ion cannons are another regular appearance for any Star Wars fan. They are a form of armament that fires ionized particles capable of disabling electronic systems. In the films, the weapons capable of incapacitating capital ships are enormous planet-based versions, think "The Empire Strikes Back". In the now "extended" universe ion cannons are standard issue for many smaller fighters and especially capital ships.

As a form of particle beam weapon, this technology in the form of particle accelerators is commonly used today. The basic concept is to strip atoms of electrons to ionize and accelerate them by using magnets to high speeds. The principle is sound but the ability to produce high energy "bolts" as seen in films would need some significant advances in our knowledge in this field. Charged particle beams diverge rapidly due to mutual repulsion.

Ion cannons in Star Wars typically involve single or multiple blasts of the ion cannon to short-circuit the target's electronics. In space, this would be devastating as it would cause significant damage to the vessel and potentially electrocute the crew near any electronic equipment. Large mass targets such as a Star Destroyer would need a significantly large amount of ions in a single shot or high fire rate and spread to cause the desired effect. 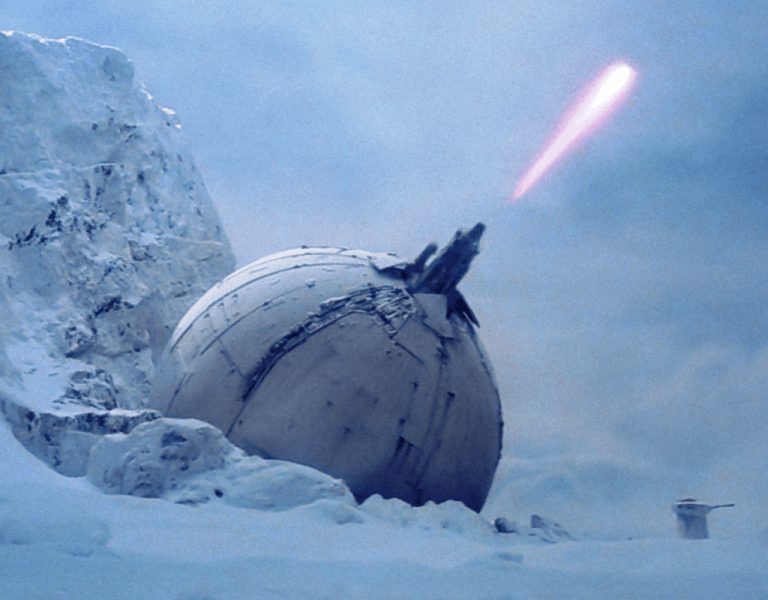 In the Star Wars Universe, tractor beams are projected force-fields used by space installations and ships to "grab" and "drag" vessels at a distance for landing or capture. Notable examples being the capture of the "Millenium Falcon" by the first "Death Star" in "A New Hope".

The origin of the concept of a tractor beam is nothing new. As early as the 1930's, author E.E Smith coined the term "attractor beam" in his novel "Spacehounds of IPC". Since the 1990's, researchers have labored to attempt to make this tech a reality with some success on a microscopic scale.

In recent studies, four separate groups of physicists have independently developed the same basic concept for this tech. The groups envisage a laser beam that can drag objects the size of a grain of salt or smaller. However, this isn't groundbreaking because since the 1980's scientist have been moving cells around by using "optical tweezers". Besides, in the past half-decade, physicists have used the tiny force of light to set nanometer-scale beams and cantilevers aquiver—or to still their motion.

The concept works similar to a blast of water from a hose. The light beam exerts a small forward push when it hits something. Light can also pull objects by using something called a gradient force. Electrical and magnetic fields in the light beam polarize the target. This polarized material then moves in the direction of where the light is most intense to reduce its energy. - Pretty awesome but sadly, nowhere near the kind of scale we see in films.

So there you go. We hope you enjoyed our quick introduction to some standard issue tech on Star Wars capital ships. What do you think? Could these iconic vessels one day become a reality? What would you like to know more about?