If you've ever watched a speeding jet fly overhead, you're probably familiar with the large clap of sound that followed after the jet whizzed by. That sound, called a sonic boom, results from objects traveling faster than the speed of sound itself. The pressure waves created by the traveling object pile up on each other, creating the thunderclap you hear. For the first time, a group of scientists managed to capture that effect on camera. 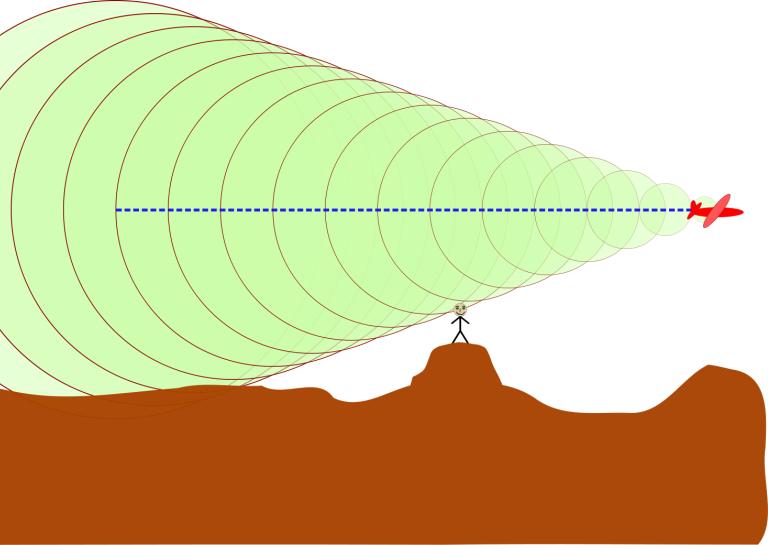 The conical shaped booms aren't restricted to sound, however. Pulses of light can leave those cone shapes as well. An international team of researchers decided to use developing technology to capture one of these Mach cones on camera.

The biggest challenge could easily be slowing down light itself to even create a 'photonic boom.' Light travels at 300,000 km per second (186,000 miles per second) when in a vacuum. Einstein's theory of relativity said nothing travels faster than the speed of light in a vacuum. However, light can be slowed down. It gets slowed by glass and water. The research team used varying substances to control light's speed.

Lead author Jinyan Liang is an optical engineer with Washington University in St. Louis, Missouri. His team crafted a unique channel nestled between two plates of silicone rubber and aluminum oxide. The team then fired green laser pulses at 7 picosecond speeds down the tunnel filled with dry ice. That fog slowed down the light and dispersed them, generating waves that entered the plates.

Capturing the event led to another challenge, and the team used a specific ultrafast camera to record the Mach cone. The 'streak camera' system collects images in spatial information. Researchers that use the process collect hundreds of images taken in succession at a trillionth of a second apart and build up the data. They do this several times over to verify each take. The process doesn't always work for capturing events that don't always repeat.

Liang and team decided to use the streak camera to get three views of the same event. One camera detailed the sequence while the other two recorded timing of events. These secondary cameras allowed the researchers to piece everything together bit by bit. Liang explained the process as "[putting] different bar codes on each individual image, so that even if during the data acquisition they are all mixed together, we can sort them out."

These types of cameras have been around for a few years. A group from MIT created a trillion-frame-per-second camera in 2011. They captured a stream of light traveling through a plastic bottle in spectacular detail. (You can watch that video here.) However, Liang's new format could lead to something bigger than just an exploration of physics.

The success of the camera itself might lead to spectacular innovations in bioengineering and medical science. In an interview with Live Science, Liang said:

"Our camera is fast enough to watch neurons fire and image live traffic in the brain. We hope we can use our system to study neural networks to understand how the brain works."

You can read the entire research paper online through Science Advances.

SEE ALSO: New Supersonic Jet Could Get from London to New York in 3.5 Hours