The world's oldest functioning planetarium dates back to the 18th-century. The planetarium was put together by a wool carder, between 1774 and 1781. It is located in the living room of a sweet, two-story Friesian canal-side house in the city of Franeker, Netherlands. 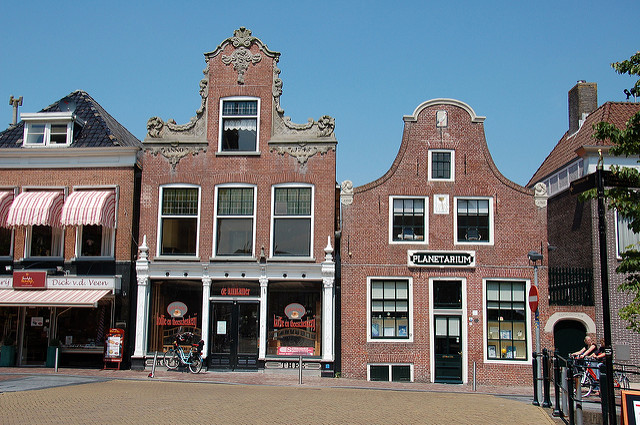 A small book was published in 1774 which created panic among the nations. The book was published by a Dutch preacher named Eelco Alta who was from the Frisian village of Bozum. Alta predicted that planet earth would be destroyed.

Some time before, astronomers announced that an unusual conjunction of the moon and some planets would occur on 8 of May 1774. The conjunction included planet Mercury, Venus, Mars and Jupiter. Alta insisted that the planets were about to collide into one another resulting in the Earth being pulled from its orbit. He argued that this would cause the planet to be incinerated in the Sun, bringing an end to life on Earth.

Alta created such hysteria as the nations believe his terrifying prediction.

Clarity for the People

A man by the name of Eise Eisinga took it upon himself to show the Dutch people that there was no reason to panic. He was a self-taught amateur mathematician and had also mastered astronomy. Eisinga, a man of many talents, was also a wool comber. His aim was to prove to the people that Alta was mistaken and that the world was not coming to an end. Therefore he decided to build a planetarium.

Eisinga created an accurate mechanical model of the solar system right in the middle of his living room. The model illustrated how all the planets in the solar system orbit the sun at the same speed. 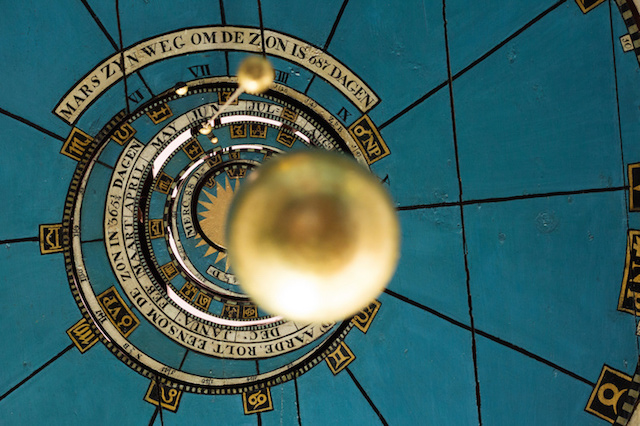 The model created by Eisinga was very accurate, despite being created in the 18-century. After so much time, the model can still be used today to determine the actual position of the planets.

Minor adjustments are made every four years which account for the extra day in a leap year. Besides for these small adjustments, the models is very precise. 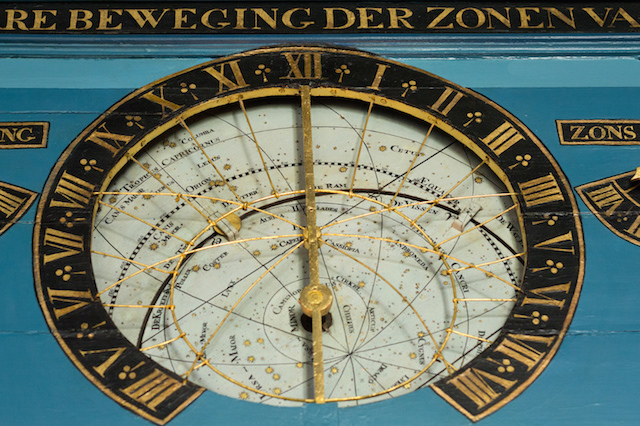 Eisinga's planetarium is suspended from the ceiling of his living room. The sun is represented by a golden orb which is slightly larger than a baseball. It is position in the center of the ceiling and surrounded by other smaller orbs. These represent the planets and are positioned in concentric grooves surrounding the sun. 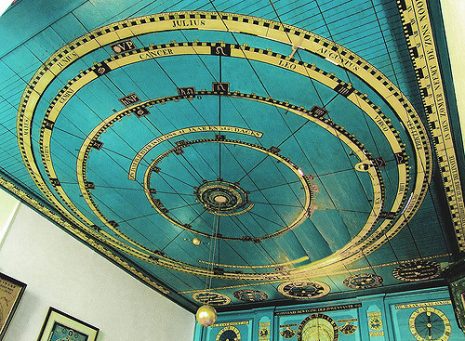 The construction of the planetarium began in 1774. Eisinga expected the construction to be finished within six months however, things took a bit longer. The entire project lasted seven long years and was completed in 1781.

Eisinga built the model at a scale of 1:1,000,000,000,000 (1 millimeter to 1 million kilometers). He chose this scale to ensure that the entire planetarium would fit on his living room ceiling. However, the planets were not created to scale as this would make them too small to see.

The model of the solar system was built from oak wood. It includes nine weights and a pendulum clock. In addition, the model is made of over 10,000 hand-forged nails.

The Mechanism Behind the Planetarium

The mechanism used to rotate the planets around the sun is located in the attic above the ceiling of the living room. Eisinga wanted the mechanism to be hidden from view. 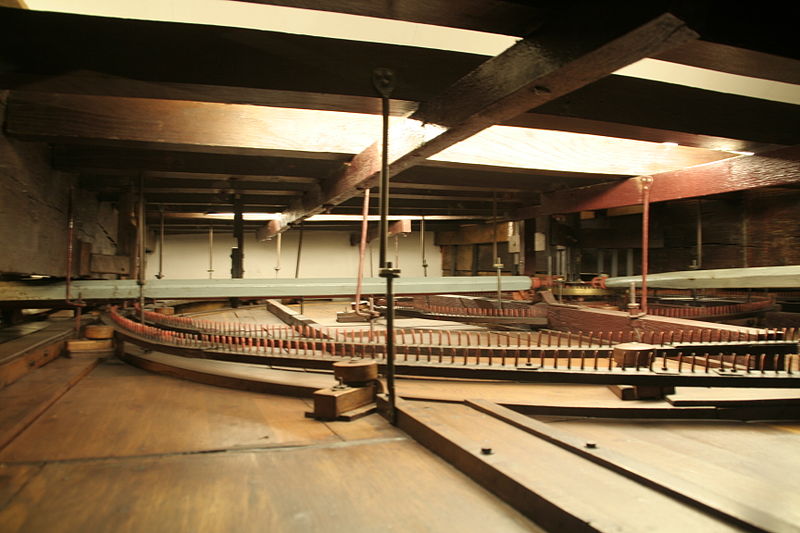 The planetarium's mechanism is driven by a pendulum clock and a series of intricate mechanical gears. These mechanisms were hand made by Eisinga. He ensured that each planet moves at the same speed that it does in our solar system. Therefore, the Mercury orb takes exactly 88 days to make one complete rotation around the sun while the Earth orb takes exactly 365 days. Additionally, Venus takes 224 days while Mars and Saturn take 687 days and 29 years respectively. 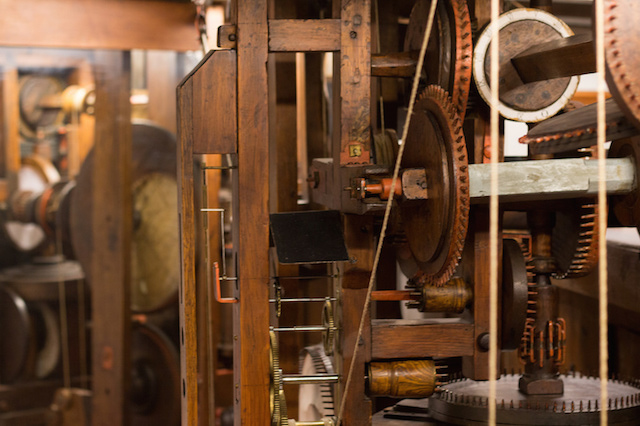 He Didn't Stop There

Eise Eisinga did not only create a realistic model of the solar system. He also put together different kinds of clocks. The clocks indicated a variety of different things such as the date, the day of the week, & the rising and setting of both the sun and the moon. Furthermore, the clocks also indicated the apparent movement of the heavens as a result of the rotation of the earth.

The magic of this antique planetarium does not stop here. The planetarium also has an impressive display of its historic astronomical instruments. The display devotes a large portion to modern astronomy as well as space exploration.

Professor J.H. van Swinden visited the Planetarium and reported to the curator of the then University of Franeker that "the Planetarium is of itself unique and without equal". He said "there is no other known work of art in which the disposition, movements and appearance of the heavenly bodies are so numerous and so accurately rendered, as is evident from the acclaim it has received from leading scholars in other countries, and even from English journalists."

Another visitor said, " The planetarium represents the values of the Enlightenment and of the long regional and cultural tradition of the 'lay scholar'. The trend had already been set by the mathematician Adriaan Metius (1572-1635), who taught not only in Latin, the customary language of learning, but also in Dutch. Many of his pupils went on to become scholars and engineers, but they also included a string of 'farmer-professors' as they were known. Eise Eisinga is the most famous of these lay scholars. He is also the only one to have left such a substantial technological legacy."

Eisinga also received scientific recognition, which justifies the accuracy of his mechanical model of the solar system yet again. Eisinga's writings and books have all been preserved and are accessible to all who wish to view them.

The Planetarium Opens to the Public

The planetarium was opened to the public shortly after it was completed. Many people came to look at Eisinga's remarkable work. Eisinga was even honored by  King William I who came to visit the planetarium in 1818. The king was so impressed by the Eisinga's work that he subsequently bought the planetarium for the Dutch state.

The Planetarium is still open to the public and is currently run by curators which are appointed by the city. The entrance fee varies according to age or the size of a group. Adults visiting the planetarium are charged € 5,25 while children between the age of 4-14 years are charged € 4,50. Furthermore, groups of more that 20 people are charged at a discounted price of € 4,25.

The planetarium has been expanded and modernized since the original construction. The planetarium is attached to a new house which now includes a reception and a ticketing area.

The Planetarium is loved by all who step foot in it. It is a capturing site filled with "good fun for big and small" said one visitor. A second visitor said, "The main planetarium still is the major attraction as it is almost unbelievable that Mr Eise Eisenga designed and constructed this so many years ago."

Another person who visited the planetarium in 2016 described the planetarium as a "don't miss". They said, "It was amazing to hear the story of why this man created a planetarium on the ceiling of his home. We laughed at first, thinking of traditional planetariums until we saw and heard the history. His alignment of planets and how they are accurate to determine the current date is astounding."

They continued saying "Being a computer programmer and having written hundreds of programs using date algorithms, I knew leap years always presented a challenge. Since this depiction of the solar system was a physical depiction with no math or logic tests to determine leap years, I asked how they accounted for leap years. The answer (the only possible answer) was right on the money. Go see this planetarium with your kids and you all will learn something. Even if it is only the incredible determination of this man."