The Engineering Behind the Absorbent Disposable Diaper If you have had a kid in the last 20 years, you probably understand how magical disposable diapers are. They have certainly changed a lot in recent years due to advances in polymer technologies, but their ability to absorb urine and keep a baby clean is unmatched. Other than being really convenient, disposable diapers are actually quite the marvel of engineering in the modern era. The engineer guy from youtube walks us through how a disposable diaper works in the video below.

The first disposable diaper was patented in 1948, before which people would have used cloth diapers, or just let their children run around without any bodily function catching device. Early disposable diapers would have been very simple, and while they were a step up from the absorbency of cloth, they were nothing compared to the modern polymer marvels that we have today.

Diapers consist of a hydrophobic layer on top, which keeps moisture away from the skin of the baby when the diaper has been soiled. The urine is then transferred to a super-absorbant polymer layer which expands as it sucks up moisture. In terms of functionality, diapers aren't hard to understand, but think about the manufacturing process. Diapers are by no means flat or even simple, so the manufacturing process is very specialized. The exact method of assembly is a trade secret, but you can find some informative 'How it's Made' videos out there that will give you a closer look at some of the process. 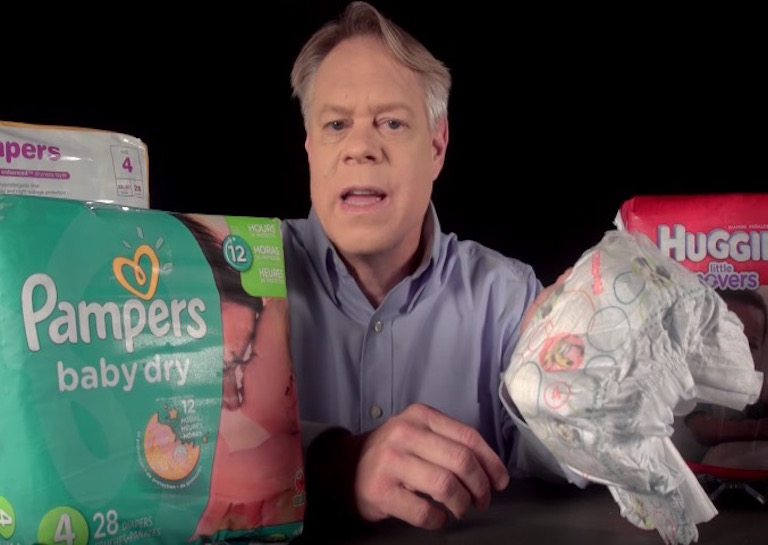 That thing wrapped around your baby's butt that keeps you from having to clean up constant messes is actually a product that has seen years of innovation and advances. From the growing amount a small diaper can hold to hydrophobic engineering, we are all glad the disposable diaper is a thing of the present.

SEE ALSO: Aerogel Can Now be Formed From Waste Paper