Recently, photos of a fish trapped inside a jellyfish have been going viral both because of their hilarity and their rarity. Ocean photographer Tim Samuel caught sight of this odd couple while filming off of Byron Bay on the eastern coast of Australia. They stayed with the pair for about 20 minutes, capturing all of the images they could of this unique and possibly unphotographed phenomena. The fish, contrary to what you may think, actually isn't dead, both of the animals are alive and well. The small fish was likely using the jellyfish to hide, aka the most awesome suit of armor ever, but scientists expressed concerns about what may come of the fish and jelly pair, according to IFL Science. 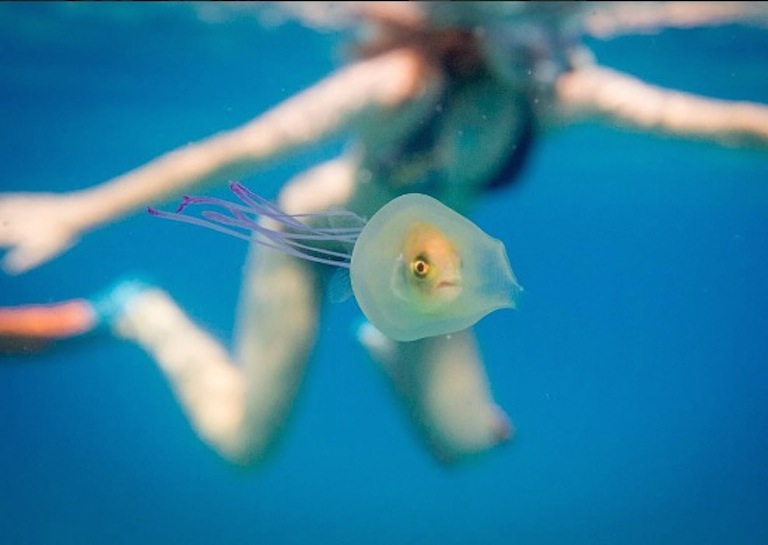 Researchers noted that the front of the jellyfish had suffered some damage, likely due to the small fish trying to escape. According to CNN, Tim decided to let the fish and jellyfish be before leaving their location, as he wanted to let nature run its course. Part of what has made these images go so viral are the rarity of capturing this phenomenon on camera, and the expression on the fish's face. The expression on the fish perfectly sums up the feeling of being trapped inside a brainless sea creature – "oh crap, I messed up."

T R A P P E D - Woke up this morning to my phone going crazy due to one my photos being reposted by @discoverocean. Here's another photo from that day. I found this fish trapped inside a Jellyfish while freediving in Byron Bay. He was trapped in there but controlled where the Jellyfish was moving. Prints are available through my website - link in bio

Tim said that as he followed the pair, he could see how the small fish was steering the jellyfish around; whether he was trying to get out or just controlling the jelly is still unclear. Nonetheless, these images are awesome and pretty incredible.