There are certain metals out there that when mixed with water, create incredibly violent reactions, often times causing large explosions. These metals are Potassium, Sodium, Lithium and Calcium, which get less reactive as you go down the list, meaning that calcium doesn't create as large of a reaction as potassium would. The metals all form a metal hydroxide as the product of the reaction, thus forming a highly alkaline solution and hydrogen gas. As you may know, hydrogen gas is extremely combustible, and this adds to the explosivity of the reactions. After knowing about these reactions, the next obvious step is to make your own bullets out of them and then shoot them into a tank of water and see what happens. This is exactly what The Backyard Scientist did, and he recorded the whole thing in slow motion as well.

The point of this test is to determine whether the bullets filled with the highly reactive metal would create a large cavity due to the reaction with water. It's an intriguing scientific endeavor, but not necessarily one that will ever be practically applied. He starts in creating the bullets by modifying current ammunition and filling the tips with the various forms of metals. After custom building a fish tank to fill with water and fire into, the tests are ready to begin.

Watching bullets get fired into water is awesome regardless of what they are made of. By far the coolest thing that happens (let me nerd out here for a moment) is cavitation when the bullet enters the water. If you don't know what cavitation is, let me explain it simply. As the bullet enters the water, it is moving at a very high speed, which then, due to friction, speeds the surrounding water up as well. As the speed of the water increases, the pressure in that fluid decreases, causing it to drop below the fluid's vapor pressure. Vapor pressure is the pressure at which a fluid transitions into a vapor, so as water reaches this state, it spontaneously becomes vapor. As it does this, it also slows down, increasing the pressure and absorbing, through implosion of the gas bubble, back into the surrounding water. It does cyclically and creates a series of implosions, which can be harmful when present near ship's propellers other objects. By far the best example of this is at 5:30 in the above video when the last bullet enters the tank. Who doesn't love series of implosions? 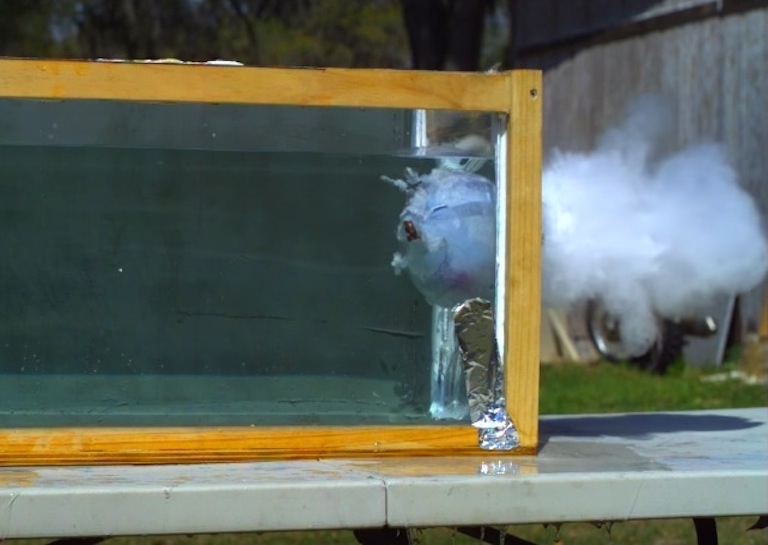 This video didn't show any significant effects on the impact the liquid metals had due to their reactions, but it was nonetheless an awesome experiment. The Backyard Scientist will be coming out with more bullet demonstration videos in the near future as a conclusion to this test, so stay tuned!