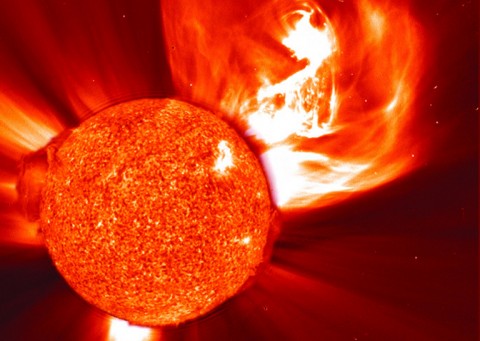 RT reports that scientists are warning solar flares could have a devastating impact on our communications and electronic systems on earth. Solar storms are huge eruptions of mass and energy from the sun. The sudden release of large amounts of magnetic energy from the solar storms can collide with Earth’s own magnetic field. Experts in the field of solar storms report that an extreme magnetic sun storm "is almost inevitable in the future, but the probability of an extreme storm occurring is relatively low at any given time.”  Solar storms could affect our highly interconnected electronic and communication systems in ways we cannot even conceive. Also, these powerful storms could corrode water and sewer pipes, ruin computer memory as well as damage other electronics.

It's quite unclear when such a solar storm will hit earth but scientists are warning governments to be prepared. The largest solar storm to hit earth happened in 1859 and was called the Carrington event which caused the telegraph systems in both Europe and US to stop.

"Telegraph systems all over Europe and North America failed, in some cases giving telegraph operators electric shocks. Telegraph pylons threw sparks. Some telegraph operators could continue to send and receive messages despite having disconnected their power supplies." -Wikipedia

Last year a solar storm knocked out the air traffic control systems in Sweden, which resulted in all the flights in that area being grounded. The solar flares caused the airplanes to disappear completely from radar. The storm lasted about an hour but did not affect neighboring countries.

There was a large solar storm in 2012 that just barely missed Earth. We have known about solar flares for a while but their existence usually doesn't make front page news. However, imagine a future when self-driving cars are filling up our freeways. The idea of these autonomous, electronically-controlled cars being affected on a large scale by a magnetic storm doesn't sound so cool.

It's true there's nothing we can do to prevent such solar storms, but the US is creating contingency plans to cope with such a possibility. I think before we decide to make our entire existence dependent upon electrical signals, we should carefully consider the consequences of such a dependence. If anything, solar storms make us aware that we are not ultimately in control of our planet. Nature still has its own ways of asserting its existence, making us aware of just how dependent we are on it for our survival.

As I was researching this topic, I realized a refresher course is in order for how the sun works. Here's a video in case you're like me and never quite learned how the sun produces energy, as much energy as one trillion megaton bombs every second, to be precise.

Our sun has cycles of intense activity and relative calm. These cycles seem to have a pattern which occurs every eleven years. There are also shorter cycles that occur every 330 days. It's interesting to note that solar storms are responsible for creating the intensely colorful and unusual aurora borealis that can be seen at high northern latitudes. The aurora borealis remained a mystery until science uncovered the causes fairly recently. The image below shows how the aurora borealis is caused by solar energy:

More Stories
innovationMetaverse: what is it and what possibilities does it offer?
Loukia Papadopoulos| 2/3/2022
scienceAustralian astrophysicist says ‘we are lucky’ SpaceX’s Crew-1 debris landed in a rural area
Chris Young| 8/13/2022
diyFrom mine to kitchen, here's how raw marble is processed
Christopher McFadden| 2/25/2022