The next phase of deep space exploration is due to begin, with the opening of the largest radio telescope ever built: the Aperture Spherical Radio Telescope (FAST) in China's Guizhou Province. 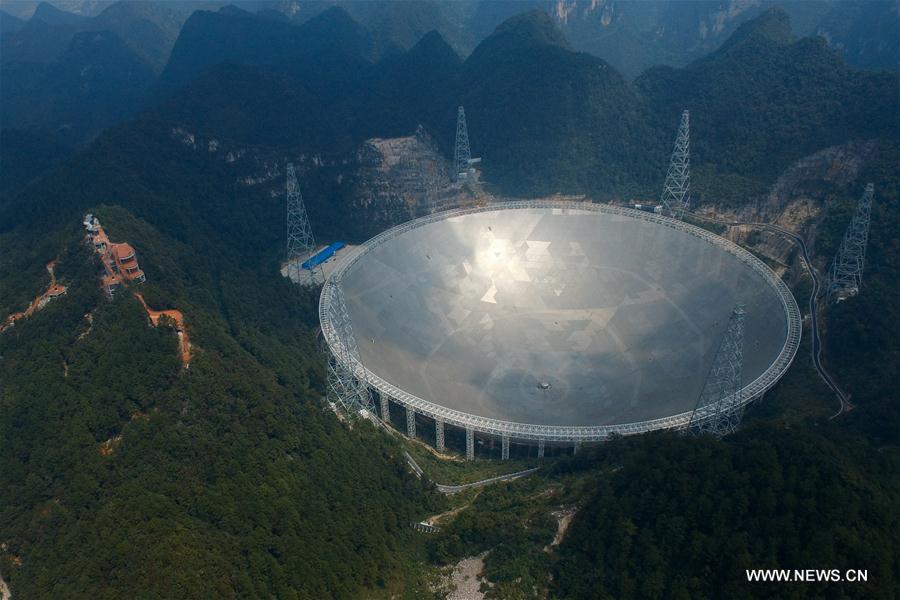 Opening on Sunday, FAST is a monster. With an aperture of 500 metres, the telescope's 4,450-panel reflector is as large as 30 football fields. This is some serious listening power, with more than twice the sensitivity of the Arecibo Observatory in Puerto Rico. According to the Xinhua news agency, engineers believe the telescope to be sensitive enough to 'capture the signal of a cell phone being used on the moon'.

To ensure an environment sufficiently quiet for monitoring, nearly 8,000 people living within a 5-kilometre radius of the site were relocated. Even mobile phone use is prohibited within this zone. The FAST project's deputy manager, Zhang Shuxin, said "There are successful examples of coexistence between a radio telescope and 'astronomy towns' outside China. The key is a strict ban on electronic devices in the zone."

Physical work on the structure began in 2011 and cost China nearly 180 million US dollars.

Key functions of the telescope include exploration of both interstellar molecules and interstellar communication signals. It will also be tasked with the observation of pulsars, an assignment in which it has already proven its worth. Associate researcher Qian Lei reported that FAST detected 'set of high-quality electromagnetic waves sent from a pulsar about 1,351 light-years away' in recent trial observations.

Deputy chief technologist, Sun Caihong, reported that discoveries using FAST are expected to double the number of known pulsars. Advances in gravitational wave and general relativity theory study are also expected to occur thanks to the extended range of the new telescope.

For the next few years, the telescope will require continuous adjustment. Chinese scientists will continue to optimise FAST for two or three years while they perform 'early stage research'. China will then open the telescope up to the global scientific community.