A lot of us have experienced the dismay of dropping your phone to pick it up with a shattered or cracked screen. The dilemma can be an unexpected blow to the wallet. Now, scientists from the University of Akron have found a new way to make phone screens shatter proof.

Assistant professor of polymer science Yu Zhu and his team discovered that, by adding a (fully transparent) layer of electrodes to a polymer surface, it makes the surface way more durable and flexible. The new method will also be just as transparent as current coatings and that it may even be more conductive.

Traditional touch screens have coatings of indium tin oxide (ITO) which has compromised scratch resistance by being a bit more brittle than desired. ITO's are also both weaker and more expensive than the new electrode coating. "These two pronounced factors drive the need to substitute ITO with a cost-effective and flexible conductive transparent film," Zhu said in a news release. 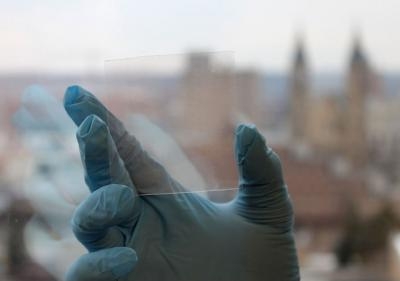 "We expect this film to emerge on the market as a true ITO competitor," Zhu continued, "The annoying problem of cracked smart phone screens may be solved once and for all with this flexible touch screen."

There has yet to be a detailed release of exactly what the electrode coating is but tests have shown that the material can be bent over 1o00 times without breaking - although we're not sure how often you're going to bend your phone unless it paves the way for new bendable devices. It was also tested with Scotch Tape to ensure the coating remains on the surface (don't underestimate Scotch Tape, it was the major component to the discovery of Graphene).