Scientist Discover Switch That Can Shut Down Alcohol Cravings

Scientists have discovered the part of the brain responsible for alcohol cravings and have found a way to shut it off in alcohol-dependent rats.

Researchers may have found a way to shut off alcohol-related cravings with the flip of a switch, opening the door to new therapies for alcohol addiction.

Scientists at Scripps Research Institute (SRI) have discovered a way to shut down the alcohol cravings in alcohol-dependent rats, raising hopes for new drugs or gene therapies that can combat alcohol abuse.

Using lasers, the researchers were able to temporarily deactivate a certain neuronal population that is tied to alcohol-seeking behavior and were even able to reduce the physical symptoms of withdrawal.

"This discovery is exciting--it means we have another piece of the puzzle to explain the neural mechanism driving alcohol consumption," says Olivier George, PhD, an associate professor at SRI and the senior author of the study. The research was published this week in the journal Nature Communications.

George and other researchers at SRI have been hunting down the specific brain cells that drive cravings for alcohol for years. Back in 2016, they identified a region of the brain, a neuronal “ensemble” called corticotropin-releasing factor (CRF) neurons, located in the central nucleus of the amygdala that showed promise.

Using implanted fiber optics in the brains of the rats, the SRI team were able to deactivate neurons in this part of the brain with the flip of a switch.

Taking rats that had been induced to develop an alcohol dependency over several months, researchers took away the alcohol. The rats exhibited the expected symptoms of alcohol withdrawal, such as shaking and abnormal gait. When they reintroduced the rats to alcohol, the rats drank more than ever, and the researchers saw that the CRF neurons were active, driving the rats to drink more alcohol than they had before. 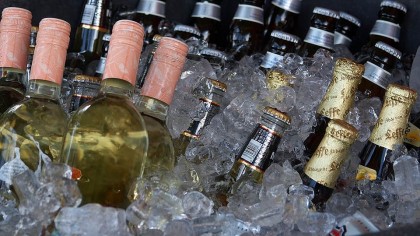 When the scientists flipped the switch on the fiber optic implants to deactivate the CRF neurons, however, the behavior of the rats changed dramatically. The rats intense impulse to drink excessively disappeared entirely and they started drinking as little as they did prior to becoming dependent. They even noticed that the rats physical withdrawal symptoms lessened.

The effect could be reversed simply by deactivating the laser implants. As soon as the switch was shut off, the rats went back to drinking excessively now that the CRF neurons were reactivated, providing even stronger evidence of the link between the targeted neurons and alcohol cravings.

George hopes that new drug compounds and gene therapies can target these neurons and provide effective treatment for those suffering from alcohol abuse disorder, which more than 15 million US adults suffer from.