Swedish paleontologist and geologist is shedding new light on an ancient sea creature via collated research and a highly detailed model series.

A scientist's passion has joined forces with an artist to create a super realistic sculpture of a long-extinct sea creature. Agnostus pisiformis lived over 500 million years ago, but years of dedicated research is offering a fresh perspective on sea biology. The creature lived between 506 to 492 million years ago, becoming extinct in the early stages of the Upper Cambrian period. It has been found in fossils in England, Scandinavia, and Russia.

Swedish paleontologist and geologist Mats E. Eriksson has spent years collating all the resources he could find on this creature and published a paper outlining his collection in Earth Science Reviews.

In order to really get the world interested in this tiny animal he also hired an artist to make three highly detailed 3D printed sculptures of Agnostus pisiformis. The sculptures provide a fascinating insight into how these animals functioned. While it leans to more extraterrestrial than cuddly cute, the sculpture is loved by its creator. “Beauty is in the eye of the beholder of course, but to me it is beautiful for a number of reasons,” Eriksson told Gizmodo. “I love its anatomy, but I guess it becomes even more beautiful in my eyes because of its long and convoluted research history, and its applicability. Finally, being known from exceptionally [well] preserved material we have detailed insights into its anatomy... What is there not to love?”

Eriksson's work has shed light back on a creature that has been known in scientific circles for centuries. It’s first known mention in literature was by Swedish scientist Magnus von Bromell in 1729. With so many fossils of the creature turning up all over the world, many scientists have taken a turn in accurately drawing and describing it. This multitude of information meant that when Errikson approached Danish artists Esben Horn to create the detailed models, there was a lot of ground material to begin to work from. While the real creature was only about one centimeter wide, Horn scaled up his sculpture to allow for greater detail. Erkisson described it saying, “The sculptures have been greatly scaled up and show the animal’s complete anatomy down to the smallest detail, including all the extremities and antennae. The incredible degree of preservational detail means that we can grasp the entire anatomy of the animal, which in turn reveals a lot about its ecology and mode of life.” 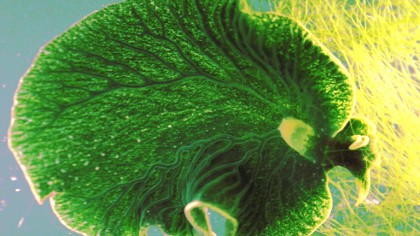 Each of the three sculptures shows the creature in a different position. The first shows the animal in its defensive or protective posture, one depicts the animal swimming and the final sculpture shows what the creature looks like as a fossil. The models in conjunction with Eriksson's survey of research helps scientists understand not only this particular creature but what life was like on earth at the time of its life. Agnostus pisiformis can be useful to help date other materials and rocks it is found with. It’s often found in both shale and limestone nodules, where it’s excellently preserved. Eriksson hopes to take his sculptures and research on the road as a tour to show off this tiny animal to the world.