Scientists have come up with their best estimate yet of the total mass of our home galaxy, the Milky Way.

Scientists announced today that they have greatly improved their estimate of the mass of the Milky Way galaxy with its most precise measurement yet.

Measuring The Mass of the Milky Way

Scientists have combined new data from the European Space Agency’s (ESA) Gaia mission and observations made using the ESA/Hubble telescope to determine its most precise measurement of the total mass of the Milky Way galaxy: 1.5 trillion solar masses within a radius of 129,000 light years out from the center of the Milky Way.

SEE ALSO: SCIENTISTS START LISTENING IN ON THE MILKY WAY'S SOUNDS TO SEARCH FOR ALIEN LIFE

Earlier estimates of the mass of our home galaxy have ranged from 0.5 trillion to 3 trillion solar masses. This uncertainty is primarily a function of the different means astronomers and physicists used to measure the distribution of dark matter through the galaxy.

Scientists believe that dark matter, matter whose mass we can detect but which isn’t visible otherwise, makes up about 90% of the mass of our galaxy.

“We just can’t detect dark matter directly,” said Laura Watkins of the European Southern Observatory in Germany, who led the team making the new estimate. “That’s what leads to the present uncertainty in the Milky Way’s mass — you can’t measure accurately what you can’t see!”

Measuring Velocity as a Function of Galactic Mass

Since dark matter is so difficult to measure, the team had to come up with a different approach to weighing the Milky Way. They relied on measurements of the velocities of globular clusters, dense clusters of stars that orbit the spiral disc of the of the galaxy at a considerable distance.

“The more massive a galaxy, the faster its clusters move under the pull of its gravity,” said N. Wyn Evans of the University of Cambridge, UK. “Most previous measurements have found the speed at which a cluster is approaching or receding from Earth, that is the velocity along our line of sight.”

“However, we were able to also measure the sideways motion of the clusters, from which the total velocity, and consequently the galactic mass, can be calculated.”

Combining a Decade of Data from Hubble and Gaia

The team used the recent release of data collected by Gaia, its second release so far, in April of last year as the basis of their calculations. The ESA’s Gaia mission is designed to create the most precise 3D map of the astronomical objects in the galaxy and track how they move over time.

The April release of data included data on globular clusters as far away as 65,000 light years from Earth. 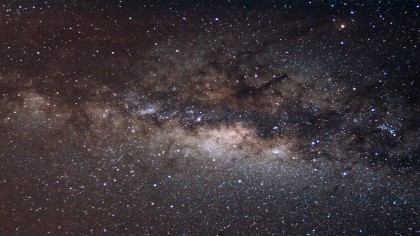 Taking this data, they were able to combine it with measurements of globular clusters as far away as 130,000 light years from Earth that Hubble has taken over the last decade, giving the team an enormous amount to data to work with.

“We were lucky to have such a great combination of data,” said Roeland van der Marel, of the Space Telescope Science Institute in the United States.

“By combining Gaia’s measurements of 34 globular clusters with measurements of 12 more distant clusters from Hubble, we could pin down the Milky Way’s mass in a way that would be impossible without these two space telescopes.”