The advanced computers revolutionizing everything in our modern world are now also being used to test out stress theories on materials.

With the increasing resource demands of our technology-fueled society, people are after more and more ways to map out the composition, properties and performance level of a number of materials, with some researchers shining the spotlight on graphene, while others are out to create new innovative shapeshifting materials.

Part of this equation also involves examining the way that materials will perform under a host of various conditions. Now, a team of researchers are looking at a radical way to measure the stress materials undergo by using supercomputers. Both Jetstream and Comet supercomputers were employed for the job.

On the atomic level, the supercomputers were given the task of force interaction simulations involving crystals, each one consisting of 240,000 atoms.

A Starting Point for the Research

Basing their work on the physics-based concept of force divided by area, as well as the concept that there is a symmetrical aspect to stress, the supercomputer was developed essentially to test out this theory, from the material to the atomic level, with the goal of "examin[ing] the theoretical origins of the symmetry of the stress tensor and identify the assumptions and misinterpretations that lead to its symmetric property."

The molecular dynamics simulations conducted via the supercomputer allowed the researchers to challenge many theoretical assumptions about stress, mainly that the theory of symmetry would hold up in atomic virial and hardy stress tests.

"The commonly accepted symmetric property of a stress tensor in classical continuum mechanics is based on certain assumptions, and they will not be valid when a material is resolved at an atomistic resolution.

[T]he widely used atomic Virial stress or Hardy stress formulae significantly underestimate the stress near a stress concentrator such as a dislocation core, a crack tip, or an interface, in a material under deformation," explains Liming Xiong, Iowa State University Aerospace Engineering Assistant Professor, and co-author of the paper.

The Implications of the Simulations

The strength of this research is that it offers a more comprehensive approach to stress that will produce perspectives on both the (1) micro and (2) macro scale. Such a multiscale level of modeling, the team believes, stands to benefit researchers across a broad range of scientific disciplines, especially in glass and metal design. The fog up factor, for instance, could be dramatically different. 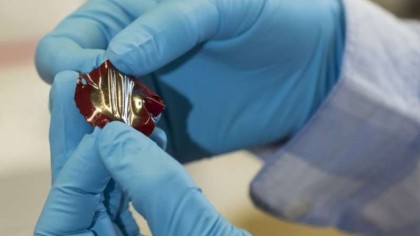 "Multiscale is trying to bridge the atomistic continuum. In order to develop a methodology for multiscale modeling, we need to have consistent definitions for each quantity at each level. This is very important for the establishment of a self-consistent concurrent atomistic-continuum computational tool.

With that tool, we can predict the material performance, the qualities and the behaviors from the bottom up. By just considering the material as a collection of atoms, we can predict its behaviors. Stress is just a stepping stone. With that, we have the quantities to bridge the continuum," Xiong shared.

Details about the study appear in a paper, titled "Asymmetry of the atomic-level stress tensor in homogeneous and inhomogeneous materials", which was published September 5th in the Proceedings of the Royal Society A journal.