A fresh study might change our knowledge about dinosaur extinction. A group of scientists at the University of California, Berkeley, published a paper in Science Magazine suggesting that an asteroid (or comet) impact in the Caribbean Sea 66 million years ago boosted the volcanic activity in India, the other side of the planet causing the calamity.

The scientists investigated samples from the so-called Deccan Traps lava flows, a result of million-years-long eruptions covering the surface with lava on a massive scale in India (500 kilometers across the continent, with nearly 2 kilometers thick).

It was known from prior research that the flows continued for about a million years, although, having scrutinized more samples from various locations, the new study claims that three-quarters of the lava erupted after the impact, countering the earlier claims saying that 80 percent of the lava flow occured before the impact.

Professor Paul Renne, director of the Berkeley Geochronology Center, one of the authors of the article says: "That is an important validation of the hypothesis that the impact renewed lava flows."

Scientists found the period of worldwide mass extinctions to be at the end of the Cretaceous Period. We have long known that the simultaneous events of eruptions and the impact are responsible for killing off the dinosaurs (amongst other species). Where the new research challenges its predecessors is the effects the simultaneously happening catastrophes played on one another.

As co-author Courtney Sprain, a former Berkeley grad student summarizes the new information: "Either the Deccan eruptions did not play a role - which we think unlikely - or a lot of climate-modifying gases were erupted during the lowest volume pulse of the eruptions.”

Using three times more basalt samples, the team is confident that the eruptions happened at the same time in case of the whole continent, which proves their belief that it was triggered by the impact of the asteroid.

Volcanos vs asteroid, or volcanos and asteroid?

Volcanic activity releases a vast amount of gases into the atmosphere such as carbon dioxide, methane, sulfur, and aerosols. Although while some of them warm the planet, others cool it down. The impact of the asteroid, on the other hand, sends dust into the atmosphere which blocks the sun, thus, contributes to the cooling of the planet. 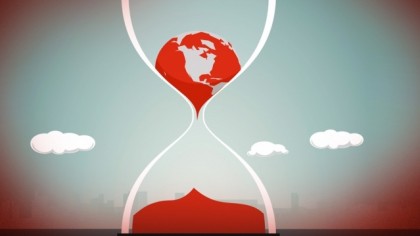 What exactly caused the extreme, eight degrees Celsius global warming in the K-Pg boundary then? Even the scientists seem a little confused, Sprain says: “Both the impact and Deccan volcanism can produce similar environmental effects, but these are occurring on vastly differing timescales, (…) Therefore, to understand how each agent contributed to the extinction event, assessing timing is key."

The fact that there is no flood basalt eruption happening makes it extremely hard to know the order of the gases emitted during this activity. Even the most recent one happened some fifteen million years ago by the Columbia River.

And here is another interesting fact just to make the whole story even more confusing. As Sprain noted, a research group from Princeton is publishing an article that aims to precisely date the Deccan Traps in the same issue of Science, however, there are major differences between the two groups’ results.

The US Navy Just Canceled the Railgun. But Hypersonic Missiles Are Still On