The research experiments consist of nanoparticles rotating around each other at a billion times per second and are both currently the world's fastest man-made spinning objects in history.

Two independent research teams revealed the breakthroughs of world’s fastest mechanical rotation. The experiments consist of nanoparticles rotating around each other at a billion times per second (60 billion revolutions per minute), currently the fastest man-made spinning objects in history.

A tool for studying extreme conditions

The first such team was led by study co-author Tongcang Li of Purdue University in Indiana. Li and his colleagues created a system featuring an elongated nano-object supported by a 170 nanometers wide and 320 nanometers long dumbbell and spun on laser tweezers and a polarized light.

The experiment is part of an emerging field called levitated optomechanics. The subject focuses on thoroughly isolated mesoscopic systems that can produce specialized tools for testing fundamental physics theories of physics and form the basis for next-generation sensing technologies.

"This study has many applications, including material science," said in a statement Li, who is also an assistant professor of physics and astronomy, and electrical and computer engineering, at Purdue University. "We can study the extreme conditions different materials can survive in." 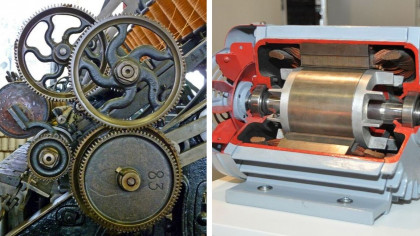 Traditionally, devices such as Li's were used in the exploration of concepts such as gravitational constant and the Earth's density. Li hopes his more advanced version will allow the exploration of quantum mechanics and the properties of vacuum friction and gravity.

"People say that there is nothing in vacuum, but in physics, we know it's not really empty," Li said. "There are a lot of virtual particles which may stay for a short time and then disappear. We want to figure out what's really going on there, and that's why we want to make the most sensitive torsion balance."

A tool for studying material properties at the nanoscale

Meanwhile, the second team led by study co-author Lukas Novotny of the Swiss Federal Institute of Technology (ETH) in Zurich used a similar process only featuring the more traditionally used compact particles instead of dumbbells. This model was based on earlier more inefficient experiments that held the nanoparticle in an evacuated chamber thus reducing rotational speed due to frictional drag from air molecules left in the chamber.

"We find that the steady-state rotation frequency scales linearly with the optical trapping power and inversely with pressure, consistent with theoretical considerations based on conservation of angular momentum. Rapidly changing the polarization of the trapping light allows us to extract the pressure-dependent response time of the particle’s rotational degree of freedom," states the paper.

This latter technique is particularly useful in the study of material properties at the nanoscale. Both papers were published in the journal Physical Review Letters.

7 Ecosystems of the World That Are Facing Imminent Destruction